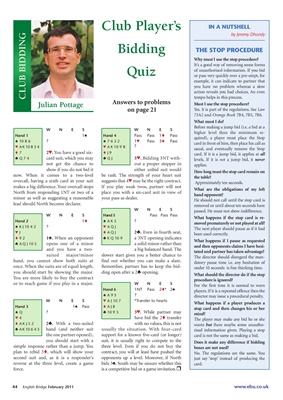 Club Player’s IN A NUTSHELL

Why must I use the stop procedure?

It’s a good way of removing some forms

Quiz of unauthorised information. If you bid

or pass very quickly over a pre-empt, for

example, it can indicate to partner that

you have no problem whereas a slow

action reveals you had choices. An even

tempo helps in this process.

Julian Pottage Answers to problems Must I use the stop procedure?

on page 21 Yes. It is part of the regulations. See Law

What must I do?

Before making a jump bid (i.e. a bid at a

higher level than the minimum re-

quired), a player must place the Stop

card in front of him, then place his call as

usual, and eventually remove the Stop

not get the chance to out a proper stopper in applies.

now. When it comes to a two-level be rash. The strength of your heart suit the table?

overcall, having a sixth card in your suit suggests that 4™ may be the right contract. Approximately ten seconds.

makes a big difference. Your overcall stops If you play weak twos, partner will not

What are the obligations of my left

minor as well as suggesting a reasonable your pass as dealer. He should not call until the stop card is

lead should North become declarer. removed or until about ten seconds have

W N E S passed. He must not show indifference.

What happens if the stop card is re-

moved prematurely or not played at all?

The next player should pause as if it had

™J tAQJ 2®. Even in fourth seat, been used correctly.

What happens if I pause as requested

and then opponents claims I have hesi-

and you have a two- a big balanced hand. The tated and partner has taken advantage?

hand, you cannot show both suits at find out whether you can make a slam. datory pause time i.e. any hesitation of

once. When the suits are of equal length, Remember, partner has to keep the bid- under 10 seconds is free thinking time.

you should start by showing the major. ding open after a 2® opening.

What should the director do if the stop

You are more likely to buy the contract procedure is ignored?

or to reach game if you play in a major. W N E S For the first time it is normal to warn

´A95 ? director may issue a procedural penalty.

What happens if a player produces a

stop card and then changes his or her

tAKJ52 2®. With a two-suited with no values, this is not wants but there maybe some unautho-

® A K 10 6 4 3 hand (and neither suit usually the situation. With four-card rised information given. Playing a stop

the one partner opened), support for a known five-card (or longer) card is not the same as making a bid.

you should start with a suit, it is usually right to compete to the Does it make any difference if bidding

simple response rather than a jump. You three level. Even if you do not buy the boxes are not used?

plan to rebid 3t, which will show your contract, you will at least have pushed the No. The regulations are the same. You

second suit and, as it is a responder’s opponents up a level. Moreover, if North just say ‘stop’ instead of producing the

reverse at the three level, create a game bids 3´, South may be unsure whether this card.

force. is a competitive bid or a game invitation.r