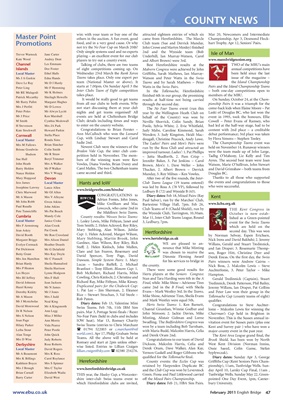 win: with your team or buy one of the attracted eighteen entries of which six Mar 20, Newcomers and Intermediate

Master Point others in the auction. A fun event, good came from Herefordshire. The Marcle Championship. Apr 3, Desmond Flock-

Promotions food, and in a very good cause. Or why

not try the No Fear Cup on March 20th?

playing – an excellent event for our club

Channel Les Emmans Talking of clubs, there are two teams Best Herefordshire results at the TWO of the MBU’s main

Islands Dee Foster of eight competitions coming up. On Malvern Congress were achieved by John annual competitions have

Ms J A Gaskin Edna Hands Teams takes place. Only one expert per Watson and Peter Watts in the Swiss issue of the magazine –

Dave Le Ray Mr D I Hardy team (National Master or above). It Teams and by Sarah Mathews – Peter the Island Championship

Peter Ling Mr F Hemming starts at 7.00pm. On Sunday April 3 the Watts in the Swiss Pairs. Pairs and the Island Championship Teams

Inter Clubs Team of Eight competition In the Tollemache, Herefordshire – both one-day competitions open to

takes place. finished 6th in our group, the promising members of the MBU.

It would be really good to get teams results at half-time not being carried On Sunday, October 24, at the Cham-

from all our clubs to both events. Why through the second day. pionship Pairs it was a triumph for the

The No Fear Teams event (run this

Peter Poles Mr Alwyn Lycitt nights and get teams organised? All year by the Wellington Heath Club on Laski of Douglas BC, who last won the

Mr J Price Ken Marshall events are held at Cheltenham Bridge behalf of the County) was won by event in 1993, took the honours. Ellie

H Stevenson Mrs JA Park to enter on the county website. Poole, Sylvia White; 2. Evie Whitfield, had led at the half-way stage, had to be

Sadie 2nd. The Ladies’ Pairs and Men’s Pairs were The Championship Teams event was

Newent Club were the winners of the run by the Ross Club and attracted an held on November 14. Runaway winners

Bredon Vale Cup, the inter club com- improved turnout. Ladies’: 1. Pat Phillips were the team made up of John Large,

Mary Hopgood Devon After two of the five rounds, the Inter- Thanks to all those who supported

Josephine Lawrey Lance Allen was led by Ross A (78 VP), followed by who were successful.

Lowcock, who came 2nd in Club Teams of 8 (Chadd Shield), run by THE Kent Congress in

Gardner, Alan Wilson, Roy Riley, Rick WE are pleased to an- Willans, Gerald and Stuart Tredinnick,

Clare and Ian Fearon, Rosemary and was chosen to receive the son, Roger Hitt, Christine Dyer and

Hilary Parker Vida Pearce Swiss Teams (entries to Chris Marchant won by a team including Bob Turnham, Kent and Surrey pair ) who have won a

Mrs D Wise Judy Roberts Teams. All the above will be held at Congratulations to our team of David Brook Shield, has been won by North

retained by Harpenden Duplicate BC pionship), 11am, Tunbridge Wells. Sun-