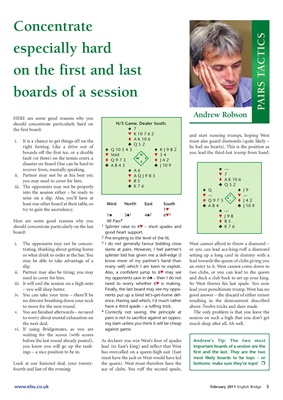 on the first and last

boards of a session

HERE are some good reasons why you

i. It is a chance to get things off on the t A K 10 6 must also guard diamonds (quite likely –

right footing. Like a drive out of he had no hearts). This is the position as

bounds off the first tee, or a double you lead the third-last trump from hand:

into the session either – be ready to

seize on a slip. Also, you’ll have at W E

2 Pre-empting to the level of the fit.

i. The opponents may not be concen- 3 I do not generally favour bidding close West cannot afford to throw a diamond –

trating, thinking about getting home slams at pairs. However, I feel partner’s or you can lead ace-king-ruff a diamond

or what drink to order at the bar. You splinter bid has given me a skill-edge (I setting up a long card in dummy with a

slip. many will) which I am keen to exploit. an entry to it. West cannot come down to

ii. Partner may also be tiring; you may Also, a confident jump to 6™ may see two clubs, or you can lead to the queen

need to cover for him. my opponents save in 6´ – then I do not and duck a club back to set up your king.

iii. It will end the session on a high note need to worry whether 6™ is making. So West throws his last spade. You now

– you will sleep better. Finally, the last board may see my oppo- lead your penultimate trump. West has no

iv. You can take your time – there’ll be nents put up a tired let’s-get-home def- good answer – the discard of either minor

no director breathing down your neck ence. Having said which, I’d much rather resulting in the denouement described

to move for the next round. have a third spade – a ruffing trick. above. Twelve tricks and slam made.

v. You are finished afterwards – no need 4 Correctly not saving: the principle at The only problem is that you leave the

the next deal. ing slam unless you think it will be cheap much sleep after all. Ah well.

vi. If using Bridgemates, as you are against game.

waiting for the scores (with scores

before the last round already posted), As declarer you win West’s four of spades Andrew’s Tip: The two most

ings – a nice position to be in. has overcalled on a queen-high suit (East first and the last. They are the two

Look at our featured deal, your twenty- the queen). West must therefore have the bottoms: make sure they’re tops! r

fourth and last of the evening: ace of clubs. You ruff the second spade,