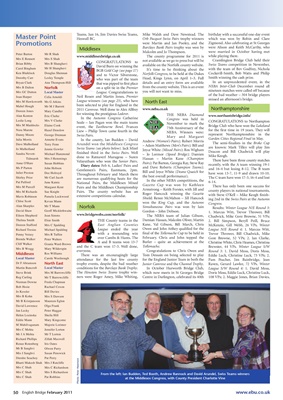 Promotions were Martin and Jan Pooley, and the

were Alison and Keith McCarthy, who

Middlesex were married in October having met

www.middlesexbridge.co.uk The county programme for 2011 is while playing there.

David Burn on winning the

Carol Bingham Mr H Shanghavi It’s time to be thinking about the with the team of Bev Godfrey, Nichola

and to Victor Silverstone,

Bryan Clark Ann Thompson-Hill that was pipped to first place details and an entry form are available In an unprecedented event, in the

Mrs B Dalton Norfolk on a split tie in the Premier from the county website. This is an event NEBA Inter-Club December round all

Mrs GC Dutton Local Master League. Congratulations to you will not want to miss. nineteen matches were called off because

League winners (see page 23), who have missed an afternoon’s bridge.

for winning the prestigious Lederer. THE NEBA Diamond www.northantsbridge.info/

In the Autumn Congress Catherine Congress was held in

75th Anniversary of the

Nora Marote Hazel Denslow Liew – Philip Town came fourth in the for the first time in 19 years. They will

Diary dates: Feb 6, Ladies’ Pairs and recently, with the A team winning 19-1

Throughout February and March there the best overall performance).

Shirley Prior Mr Carl Jacob are numerous qualifying heats for the The C team have won 17-3, 16-4 and lost

In the other NEBA competitions, the 6-14.

Penny Voisey Mrs R Tuffen with a resounding win final of the Tollemache Cup to be held in Trevor Thrower, Bill Chadwick, Mike

A and B teams won 13-7 Butler – quite an achievement at the Christine White, Chris Heames, Christina

everyone. Congratulations to Chris Owen and Round 3: 1. David Moss, Doris Moss,

There was an encouragingly large Tom Dessain on being selected to play Eddie Luck, Christine Luck, 73 VPs; 2.

Local Master Carole Woolnough attendance for the last few county for the England Junior Team in both the Pam Peacher, Jim Bainbridge, Jean