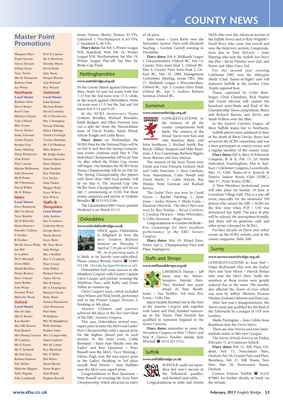 Barbara Allen John Bennett in the match against Oxfordshire, Notts and David Morran will contest the

1st team won 17-3, but the 2nd and 3rd Somerset knockout semi-finals and final of the

In the NCBA Anniversary Teams and Richard Barton, and Kevin and

Vida Clifford Mrs J Donoghue Keith Rodgers and Ellen Overton won the winners of all the In the Eastern Counties League, all

Jenny Edwards Charles Eveleigh Adrian Knight and Leslie Reece. Mixed Teams were Ken and of the death of Barry Davies. Barry had

Arthur French Yvonne Hutchins Diary dates: on Wednesdays the Ann Bawdon, Betty and served on the SCBA committee, and was

Jenny Harding Mike Roberts on Feb 9, and then the Spring Competi- Beach, Gillian Toogood and Mike Read- a regular member of the county team.

16, after which the Priday Cup events The winners of the Swiss Teams were Individual, Framlingham. Mar 6, Sud-

will begin. On Sundays the NCBA Swiss David and Gina Howard, Graham Heal

Teams Championship will be on Feb 20. and Colin Juneman; 2. Dave Latchem,

The Spring Championship (for players Tony Manickham, Colin Powell and

be on Mar 6. The Journal Cup (the Walder, Peter Gurman and Rachael

Maggie Ward NCBA Pairs Championship) will be on Brown.

events, enquiries and entries to Graham Lavenham Village Hall. This is a one-off

players who joined the EBU / SCBA for

will be relaxed, the atmosphere friendly,

Dorothy Crabtree George Berry ONCE again, Oxfordshire performance in the EBU Seniors Further details of these and other

P Girdher Sheila Bowen is delighted to host the Congress. events on the SCBA website, and in the

BC. As in previous years, it

is likely to be heavily over-subscribed. www.surreycountybridge.org.uk

Sheila Reckless John Dalkin Oxfordshire had some success in the

Middlesex Congress with County Captain who won the Men’s Pairs. Sadly the

hampton Yuletide Pairs. numbers at these events were greatly

They finished one point reduced due to the snow. The weather

ahead of Pam Booth- also affected the Teams of Four which

well in the Premier League Division 2,

Oxford Jason Hackett finished 2nd in the Pairs After last year’s disappointment, the

Local Master Alan Hennessey at the Autumn Congress and, together Surrey team just qualified for the final of

Mrs M Allin Paul Hide with Justin and Paul, finished runners- the Tollemache by a margin of 1VP over

Mrs E Barnes M Hopkins up in the Teams. Paul Hackett has London.

of the EBU Autumn Congress.

expert pairs to enter the Men’s and Ladies’

Diary dates: remember to enter the There are nine Novice and nine Inter-

Shropshire Congress on May 7 (Pairs) and mediate teams in this year’s League.

May 8 (Teams). Further details: Judy The Surrey Schools Event is on Friday,

in the Ladies’, finishing in 3rd place

John Lashbrook Stephen Russell Peter Russell on winning the Swiss Pairs and finished mid-table. 679883 for further details, or book via

Championship, which attracted an entry Congratulations to John and Denise the website.