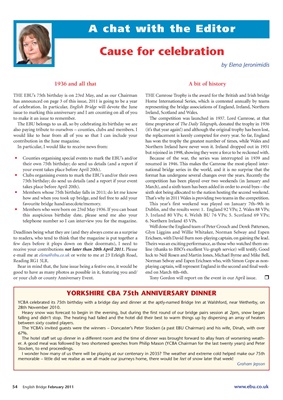 A chat with the Editor

THE EBU’s 75th birthday is on 23rd May, and as our Chairman THE Camrose Trophy is the award for the British and Irish bridge

has announced on page 3 of this issue, 2011 is going to be a year Home International Series, which is contested annually by teams

of celebration. In particular, English Bridge will devote the June representing the bridge associations of England, Ireland, Northern

issue to marking this anniversary and I am counting on all of you Ireland, Scotland and Wales.

to make it an issue to remember. The competition was launched in 1937. Lord Camrose, at that

The EBU belongs to us all, so by celebrating its birthday we are time proprietor of The Daily Telegraph, donated the trophy in 1936

also paying tribute to ourselves – counties, clubs and members. I (it’s that year again!) and although the original trophy has been lost,

would like to hear from all of you so that I can include your the replacement is keenly competed for every year. So far, England

contribution in the June magazine. has won the trophy the greatest number of times, while Wales and

In particular, I would like to receive news from: Northern Ireland have never won it. Ireland dropped out in 1951

but rejoined in 1998, showing they were a force to be reckoned with.

• Counties organising special events to mark the EBU’s and/or Because of the war, the series was interrupted in 1939 and

their own 75th birthday; do send us details (and a report if resumed in 1946. This makes the Camrose the most-played inter-

your event takes place before April 20th). national bridge series in the world, and it is no surprise that the

• Clubs organising events to mark the EBU’s and/or their own format has undergone several changes over the years. Recently the

75th birthday; do send us details (and a report if your event competition has been played over two weekends (in January and

takes place before April 20th). March), and a sixth team has been added in order to avoid byes – the

• Members whose 75th birthday falls in 2011; do let me know sixth slot being allocated to the nation hosting the second weekend.

how and when you took up bridge, and feel free to add your That’s why in 2011 Wales is providing two teams in the competition.

favourite bridge hand/anecdote/memory. This year’s first weekend was played on January 7th–9th in

telephone number so I can interview you for the magazine. 6. Northern Ireland 45 VPs.

Deadlines being what they are (and they always come as a surprise Glyn Liggins and Willie Whitaker, Norman Selway and Espen

to readers, who tend to think that the magazine is put together a Erichsen, with David Burn non-playing captain, on gaining the lead.

few days before it plops down on their doormats), I need to Theirs was an exciting performance, as those who watched them on-

receive your contributions not later than 20th April 2011. Please line (thanks to BBO’s excellent Vu-graph service) will testify. Good

e-mail me at elena@ebu.co.uk or write to me at 23 Erleigh Road, luck to Neil Rosen and Martin Jones, Michael Byrne and Mike Bell,

Bear in mind that, the June issue being a festive one, it would be playing captain, will represent England in the second and final week-

good to have as many photos as possible in it, featuring you and/ end on March 4th–6th.

or your club or county Anniversary Event. Tony Gordon will report on the event in our April issue. r

YCBA celebrated its 75th birthday with a bridge day and dinner at the aptly-named Bridge Inn at Walshford, near Wetherby, on

Heavy snow was forecast to begin in the evening, but during the first round of our bridge pairs session at 2pm, snow began

falling and didn’t stop. The heating had failed and the hotel did their best to warm things up by dispersing an array of heaters

The YCBA’s invited guests were the winners – Doncaster’s Peter Stocken (a past EBU Chairman) and his wife, Dinah, with over

er. A good meal was followed by two shortened speeches from Philip Mason (YCBA Chairman for the last twenty years) and Peter

I wonder how many of us there will be playing at our centenary in 2035? The weather and extreme cold helped make our 75th

memorable – little did we realise as we all made our journeys home, there would be feet of snow later that week!