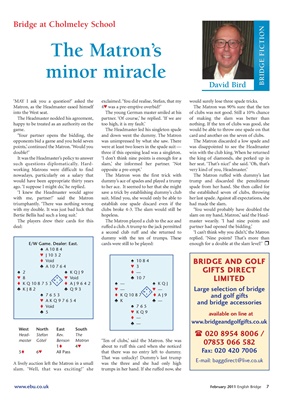 ‘MAY I ask you a question?’ asked the exclaimed. ‘You did realise, Stefan, that my would surely lose three spade tricks.

Matron, as the Headmaster eased himself 4™ was a pre-emptive overbid?’ The Matron was 90% sure that the ten

into the West seat. The young German master smiled at his of clubs was not good. Still a 10% chance

The Headmaster nodded his agreement, partner. ‘Of course,’ he replied. ‘If we are of making the slam was better than

happy to be treated as an authority on the too high, it is my fault.’ nothing. If the ten of clubs was good, she

game. The Headmaster led his singleton spade would be able to throw one spade on that

‘Your partner opens the bidding, the and down went the dummy. The Matron card and another on the seven of clubs.

opponents bid a game and you hold seven was unimpressed by what she saw. There The Matron discarded a low spade and

points,’ continued the Matron. ‘Would you were at least two losers in the spade suit — was disappointed to see the Headmaster

double?’ three if this opening lead was a singleton. win with the club king. When he returned

It was the Headmaster’s policy to answer ‘I don’t think nine points is enough for a the king of diamonds, she perked up in

such questions diplomatically. Hard- slam,’ she informed her partner. ‘Not her seat. ‘That’s nice!’ she said. ‘Oh, that’s

working Matrons were difficult to find opposite a pre-empt.’ very kind of you, Headmaster.’

nowadays, particularly on a salary that The Matron won the first trick with The Matron ruffed with dummy’s last

ago. ‘I suppose I might do,’ he replied. to her ace. It seemed to her that she might spade from her hand. She then called for

‘I knew the Headmaster would agree save a trick by establishing dummy’s club the established seven of clubs, throwing

with me, partner!’ said the Matron suit. Mind you, she would only be able to her last spade. Against all expectations, she

triumphantly. ‘There was nothing wrong establish one spade discard even if the had made the slam.

with my double. It was just bad luck that clubs broke 4-3. The slam would still be ‘You would probably have doubled the

Bertie Bellis had such a long suit.’ hopeless. slam on my hand, Matron,’ said the Head-

The players drew their cards for this The Matron played a club to the ace and master wearily. ‘I had nine points and

deal: ruffed a club. A trump to the jack permitted partner had opened the bidding.’

a second club ruff and she returned to ‘I can’t think why you didn’t,’ the Matron

dummy with the ten of trumps. These replied. ‘Nine points? That’s more than

E/W Game. Dealer: East. cards were still to be played: enough for a double at the slam level!’ r

master Götel Benson Matron ‘Ten of clubs,’ said the Matron. She was

1t 4™ about to ruff this card when she noticed

That was unlucky! Dummy’s last trump

slam. ‘Well, that was exciting!’ she trumps in her hand. If she ruffed now, she