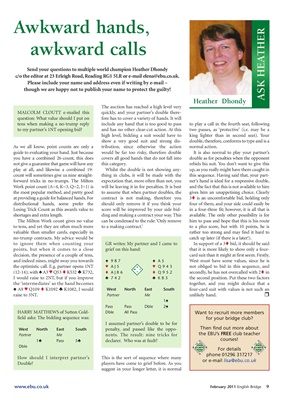 The auction has reached a high level very

MALCOLM CLOUTT e-mailed this quickly, and your partner’s double there-

question: What value should I put on fore has to cover a variety of hands. It will

tens when making a no-trump reply include any hand that is too good to pass to play a call in the fourth seat, following

to my partner’s 1NT opening bid? and has no other clear-cut action. At this two passes, as ‘protective’ (i.e. may be a

high level, bidding a suit would have to king lighter than in second seat). Your

show a very good suit and strong dis- double, therefore, conforms to type and is a

As we all know, point counts are only a tribution, since otherwise the action normal action.

guide to evaluating your hand. Just because would be far too risky, therefore double It is also normal to play your partner’s

you have a combined 26-count, this does covers all good hands that do not fall into double as for penalties when the opponent

not give a guarantee that game will have any this category. rebids his suit. You don’t want to give this

play at all, and likewise a combined 19- Whilst the double is not showing any- up, as you really might have them caught in

count will sometimes give us nine straight- thing in clubs, it will be made with the this sequence. Having said that, your part-

forward tricks in no-trumps. The Milton expectation that, more often than not, you ner’s hand is ideal for a responsive double,

the most popular method, and pretty good to assume that when partner doubles, the gives him an unappetising choice. Clearly

at providing a guide for balanced hands. For contract is not making, therefore you 3t is an uncomfortable bid, holding only

distributional hands, some prefer the should only remove it if you think your four of them, and your side could easily be

Losing Trick Count as this awards value to score will be improved by your side bid- in a four-three fit; however, it is all that is

shortages and extra length. ding and making a contract your way. This available. The only other possibility is for

The Milton Work count gives no value can be condensed to the rule: ‘Only remove him to pass and hope that this is his route

to tens, and yet they are often much more to a making contract.’ to a plus score, but with 10 points, he is

valuable than smaller cards, especially in rather too strong and may find it hard to

no-trump contracts. My advice would be catch up later (if there is a later!).

to ignore them when counting your GR writes: My partner and I came to In support of a 3t bid, it should be said

points, but when it comes to a close grief on this hand: that it is more likely to show only a four-

decision, the presence of a couple of tens, card suit than it might at first seem. Firstly,

and indeed nines, might sway you towards ´ 987 ´ A5 West must have some values, since he is

™ Q943 not obliged to bid in this sequence, and

t Q952 secondly, he has not overcalled with 2t in

the ‘intermediates’ so the hand becomes together, and you might deduce that a

field asks: The bidding sequence was: for your bridge club?

I assumed partner’s double to be for

West North East South penalty, and passed like the oppo- Then find out more about

Partner Me nents. The result: nine tricks for the EBU’s FREE club teacher

Double? players have come to grief before. As you

suggest in your longer letter, it is normal