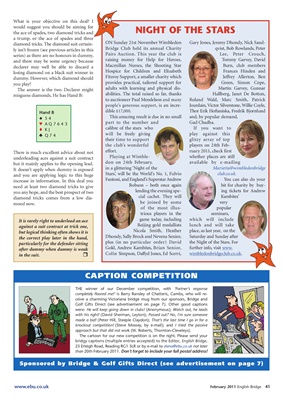 What is your objective on this deal? I

would suggest you should be aiming for

the ace of spades, two diamond tricks and NIGHT OF THE STARS

a trump, or the ace of spades and three

series) as there are no honours in dummy, Pairs Auction. This year the club is Lee, Peter Crouch,

and there may be some urgency because raising money for Help for Heroes, Tommy Garvey, David

declarer may well be able to discard a Macmillan Nurses, the Shooting Star Burn, club members

dummy. However, which diamond should Fitzroy Support, a smaller charity which Jeffrey Allerton, Ben

The answer is the two. Declarer might adults with learning and physical dis- Martin Garvey, Gunnar

misguess diamonds. He has Hand B: abilities. The total raised so far, thanks Hallberg, Janet De Botton,

´ 54 This amazing result is due in no small and, by popular demand,

t KJ calibre of the stars who If you want to

® Q74 will be freely giving play against this

their time to support glitzy array of top

There is much excellent advice about not effort. ruary 2011, check first

but it mainly applies to the opening lead. don on 24th February, avail able by e-mail ing

and you are applying logic to this huge Stars’, will be the World’s No. 1, Fulvio club.co.uk.

increase in information. In this deal you Fantoni, and England’s Superstar Andrew You can also do your

you any hope, and the best prospect of two lending the evening spe- ing tickets for Andrew

diamond tricks comes from a low dia- cial cachet. They will Kambites’

mond now. be joined by some very

of the most illus - popular

trious players in the seminars,

It is rarely right to underlead an ace game today, including which will include

against a suit contract at trick one, Beijing gold medallists lunch and will take

but logical thinking often shows it is Nicola Smith, Heather place, as last year, on the

the correct play later in the hand, Dhondy, Sally Brock and Nevena Senior, Saturday and Sunday after

particularly for the defender sitting plus (in no particular order) David the Night of the Stars. For

THE winner of our December competition, with ‘Partner’s response

completely floored me!’ is Barry Ransley of Chatteris, Cambs, who will re-

ceive a charming Victoriana bridge mug from our sponsors, Bridge and

were: He will keep going down in clubs! (Anonymous); Watch out, he leads

with his right! (David Sherman, Leyton); Passed out? No, I'm sure someone

made a bid! (Peter Hill, Steeple Claydon); That’s the last time I go in for a

knockout competition! (Steve Mossey, by e-mail); and I tried the passive

approach but that did not work (W. Roberts, Thornton-Cleveleys).

The cartoon for our new competition is on the right. Please send your

23 Erleigh Road, Reading RG1 5LR or by e-mail to elena@ebu.co.uk not later

than 20th February 2011. Don’t forget to include your full postal address!