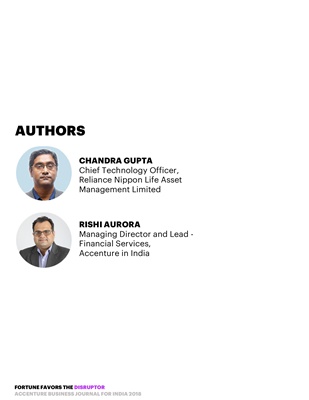 THE POWER OF THREE ZERO IN O

India's tryst with digital began in 2010

with the launch of Aadhaar, a biometric

identification program. Since then, the

Organizations are keen on embracing

technology not only to reduce costs and

boost operational efficiency, but also to

bring in transparency in operations. Other

government initiatives such as Pradhan

and services tax (GST) and demonetization

are giving a further push to digitization. As

a result, today's businesses look nothing

The Indian asset management industry is undergoing a

massive change. It's among the fastest growing in the world.

Consider this: The total assets under management (AUM) by

especially on the back of the government's Digital India