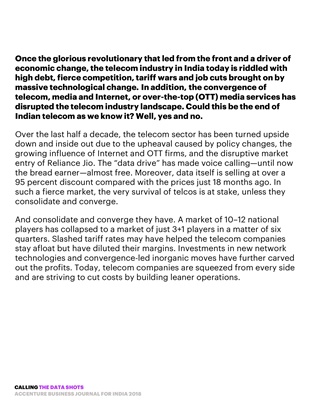 economic change, the telecom industry in India today is riddled with

massive technological change. Add to that the convergence of telecom,

media and Internet, or over-the-top (OTT) media services, that has

disrupted the telecom industry landscape. Could this be the end of

Indian telecom as we know it? Well, yes and no.

Over the last half a decade, the telecom sector has been turned upside

down and inside out due to the upheaval caused by policy changes, the

growing influence of Internet and OTT firms, and the disruptive market

entry of Reliance Jio. The "data drive" has made voice calling-until now

the bread earner-almost free. Moreover, data itself is selling at over a

95 percent discount compared with the prices just 18 months ago. In

such a fierce market, the very survival of telcos is at stake, unless they

And consolidate and converge they have. A market of 10-12 national

quarters. Slashed tariff rates may have helped the telecom companies

stay afloat but have diluted their margins. Investments in new network

out the profits. Today, telecom companies are squeezed from every side

and are striving to cut costs by building leaner operations.