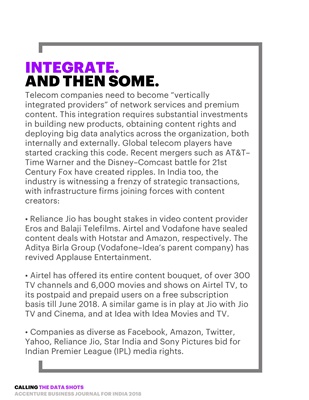 deploying big data analytics across the organization, both

started cracking this code. Recent mergers such as AT&T-

Time Warner and the Disney-Comcast battle for 21st

Century Fox have created ripples. In India too, the

industry is witnessing a frenzy of strategic transactions,

Eros and Balaji Telefilms. Airtel and Vodafone have sealed

• Airtel has offered its entire content bouquet, of over 300

TV channels and 6,000 movies and shows on Airtel TV, to

its postpaid and prepaid users on a free subscription

basis till June 2018. A similar game is in play at Jio with Jio

TV and Cinema, and at Idea with Idea Movies and TV.

THE POWER OF THREE ZERO IN O