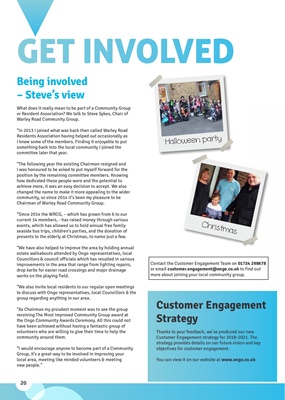 or Resident Association? We talk to Steve Sykes, Chair of

"In 2013 I joined what was back then called Warley Road

Residents Association having helped out occasionally as

I knew some of the members. Finding it enjoyable to put

something back into the local community I joined the

"The following year the existing Chairman resigned and

how dedicated these people were and the potential to

achieve more, it was an easy decision to accept. We also

changed the name to make it more appealing to the wider

community, so since 2014 it's been my pleasure to be

events, which has allowed us to hold annual free family

seaside bus trips, children's parties, and the donation of

presents to the elderly at Christmas, to name just a few.

"We have also helped to improve the area by holding annual

Councillors & council officials which has resulted in various

improvements in the area that range from lighting repairs,

works on the playing field.

"We also invite local residents to our regular open meetings

to discuss with Ongo representatives, local Councillors & the

group regarding anything in our area.

"As Chairman my proudest moment was to see the group

receiving The Most Improved Community Group award at

the Ongo Community Awards Ceremony. All this could not

have been achieved without having a fantastic group of

volunteers who are willing to give their time to help the

"I would encourage anyone to become part of a Community

Group, it's a great way to be involved in improving your

Thanks to your feedback, we've produced our new

strategy provides details on our future vision and key

You can view it on our website at www.ongo.co.ukcustomer.engagement@ongo.co.ukmer Engagement Team on 01724 298678

or email customer.engagement@ongo.co.uk to find out