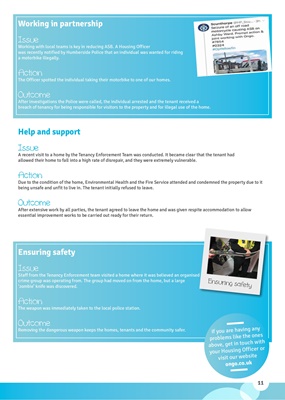 Working with local teams is key in reducing ASB. A Housing Officer

The Officer spotted the individual taking their motorbike to one of our homes.

After investigations the Police were called, the individual arrested and the tenant received a

breach of tenancy for being responsible for visitors to the property and for illegal use of the home.

A recent visit to a home by the Tenancy Enforcement Team was conducted. It became clear that the tenant had

allowed their home to fall into a high rate of disrepair, and they were extremely vulnerable.

Due to the condition of the home, Environmental Health and the Fire Service attended and condemned the property due to it

being unsafe and unfit to live in. The tenant initially refused to leave.

After extensive work by all parties, the tenant agreed to leave the home and was given respite accommodation to allow

essential improvement works to be carried out ready for their return.

crime group was operating from. The group had moved on from the home, but a large

The weapon was immediately taken to the local police station.

Removing the dangerous weapon keeps the homes, tenants and the community safer.

If you are having any

above, get in touch with

your Housing Officer or