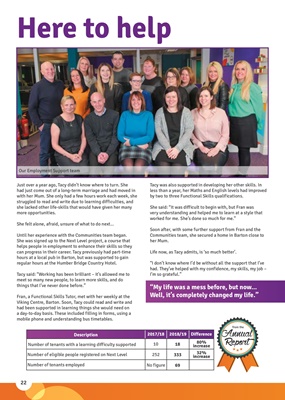 Just over a year ago, Tacy didn't know where to turn. She

with her Mum. She only had a few hours work each week, she

struggled to read and write due to learning difficulties, and

she lacked other life-skills that would have given her many

She felt alone, afraid, unsure of what to do next...

Until her experience with the Communities team began.

She was signed up to the Next Level project, a course that

helps people in employment to enhance their skills so they

can progress in their career. Tacy previously had part-time

hours at a local pub in Barton, but was supported to gain

Tacy said: "Working has been brilliant - it's allowed me to

meet so many new people, to learn more skills, and do

things that I've never done before."

Fran, a Functional Skills Tutor, met with her weekly at the

Viking Centre, Barton. Soon, Tacy could read and write and

had been supported in learning things she would need on

a day-to-day basis. These included filling in forms, using a

Tacy was also supported in developing her maths skills. In

less than a year, her Maths and English skills had improved

She said: "It was difficult to begin with, but Fran was

very understanding and helped me to learn at a style that

worked for me. She's done so much for me."

Soon after, with some further support from Fran and the

Communities team, she secured a home in Barton close to

Life now, as Tacy admits, is 'so much better'.

had. They've helped with my confidence, my skills, my job -

Well, it's completely changed my life."

Number of tenants with a learning difficulty supported

Number of eligible people registered on Next Level