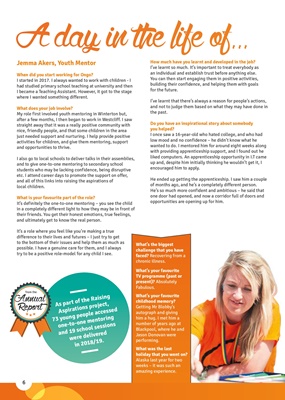 When did you start working for Ongo?

I started in 2017. I always wanted to work with children - I

had studied primary school teaching at university and then

I became a Teaching Assistant. However, it got to the stage

where I wanted something different.

What does your job involve?

My role first involved youth mentoring in Winterton but,

after a few months, I then began to work in Westcliff. I saw

straight away that it was a really positive community with

nice, friendly people, and that some children in the area

activities for children, and give them mentoring, support

and opportunities to thrive.

I also go to local schools to deliver talks in their assemblies,

and to give one-to-one mentoring to secondary school

students who may be lacking confidence, being disruptive

etc. I attend career days to promote the support on offer,

and all of this links into raising the aspirations of

What is your favourite part of the role?

It's definitely the one-to-one mentoring - you see the child

their friends. You get their honest emotions, true feelings,

and ultimately get to know the real person.

It's a role where you feel like you're making a true

difference to their lives and futures - I just try to get

possible. I have a genuine care for them, and I always

try to be a positive role-model for any child I see.

A day in the life of...How much have you learnt and developed in the job?

I've learnt so much. It's important to treat everybody as

an individual and establish trust before anything else.

You can then start engaging them in positive activities,

building their confidence, and helping them with goals

I've learnt that there's always a reason for people's actions,

Do you have an inspirational story about somebody

I once saw a 16-year-old who hated college, and who had

low mood and no confidence - he didn't know what he

wanted to do. I mentored him for around eight weeks along

with providing apprenticeship support, and I found out he

up and, despite him initially thinking he wouldn't get it, I

encouraged him to apply.

He ended up getting the apprenticeship. I saw him a couple

of months ago, and he's a completely different person.

He's so much more confident and ambitious - he said that

one door had opened, and now a corridor full of doors and

opportunities are opening up for him.

As part of the Raising

challenge that you have

faced? Recovering from a

TV programme (past or

number of years ago at

Blackpool, where he and

What was the last

holiday that you went on?

weeks - it was such an