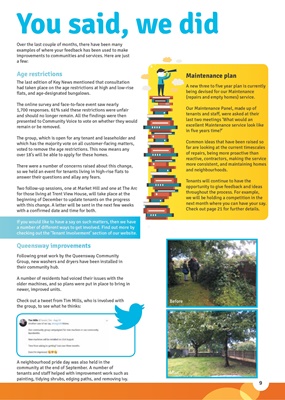 Over the last couple of months, there have been many

examples of where your feedback has been used to make

improvements to communities and services. Here are just

The last edition of Key News mentioned that consultation

1,700 responses. 61% said these restrictions were unfair

and should no longer remain. All the findings were then

presented to Community Voice to vote on whether they would

remain or be removed.

The group, which is open for any tenant and leaseholder and

which has the majority vote on all customer-facing matters,

voted to remove the age restrictions. This now means any

over 18's will be able to apply for these homes.

There were a number of concerns raised about this change,

answer their questions and allay any fears.

Two follow-up sessions, one at Market Hill and one at The Arc

for those living at Trent View House, will take place at the

beginning of December to update tenants on the progress

with this change. A letter will be sent in the next few weeks

with a confirmed date and time for both.

If you would like to have a say on such matters, then we have

a number of different ways to get involved. Find out more by

checking out the 'Tenant Involvement' section of our website.

You said, we did

A new three to five year plan is currently

being devised for our Maintenance

Our Maintenance Panel, made up of

tenants and staff, were asked at their

last two meetings 'What would an

Common ideas that have been raised so

far are looking at the current timescales

of repairs, being more proactive than

Tenants will continue to have the

opportunity to give feedback and ideas

throughout the process. For example,

we will be holding a competition in the

next month where you can have your say.

Check out page 21 for further details.

Group, new washers and dryers have been installed in

A number of residents had voiced their issues with the

older machines, and so plans were put in place to bring in

Check out a tweet from Tim Mills, who is involved with

the group, to see what he thinks:

A neighbourhood pride day was also held in the

community at the end of September. A number of

tenants and staff helped with improvement work such as