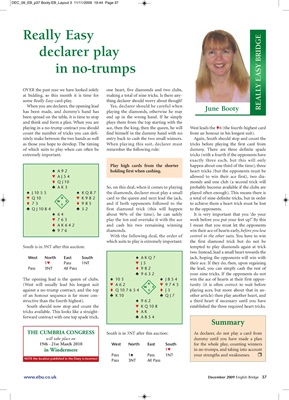 OVER the past year we have looked solely one heart, five diamonds and two clubs,

at bidding, so this month it is time for making a total of nine tricks. Is there any-

some Really Easy card-play. thing declarer should worry about though?

When you are declarer, the opening lead Yes, declarer should be careful when

has been made, and dummy’s hand has playing the diamonds, otherwise he may

been spread on the table, it is time to stop end up in the wrong hand. If he simply

and think and form a plan. When you are plays them from the top starting with the

playing in a no-trump contract you should ace, then the king, then the queen, he will West leads the t6 (the fourth-highest card

count the number of tricks you can defi- find himself in the dummy hand with no from an honour in his longest suit).

nitely make between the two hands as well entry back to cash the two small winners. Again, South should stop and count the

as those you hope to develop. The timing When playing this suit, declarer must tricks before playing the first card from

of which suits to play when can often be remember the following rule: dummy. There are three definite spade

extremely important. tricks (with a fourth if the opponents have

exactly three each, but this will only

Play high cards from the shorter happen about one third of the time), three

´ A92 holding first when cashing. heart tricks (but the opponents must be

® AK3 So, on this deal, when it comes to playing probably become available if the clubs are

™ 763 play the ten and overtake it with the ace work before you put your feet up!’ By this

® 976 diamonds. win their ace of hearts early, before you lose

With the following deal, the order of control in the other suits. You have to win

which suits to play is extremely important: the first diamond trick but do not be

South is in 3NT after this auction: tempted to play diamonds again at trick

two. Instead, lead a small heart towards the

Pass 3NT All Pass t 982 the lead, you can simply cash the rest of

(West will usually lead his longest suit ™ A62 W E

of an honour sequence is far more con- ® K 10 ® QJ7 other article) then play another heart, and

structive than the fourth highest). ´ 962 a third heart if necessary until you have

tricks available. This looks like a straight- t AK

forward contract with one top spade trick, ® A854

THE CUMBRIA CONGRESS South is in 3NT after this auction: As declarer, do not play a card from

will take place on dummy until you have made a plan

NOTE the location published in the Diary is incorrect