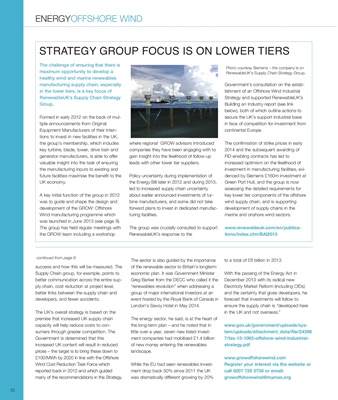 success and how this will be measured. The

better links between the supply chain and

The UK's overall strategy is based on the

capacity will help reduce costs to consumers through

Government is determined that this

prices - the target is to bring these down to

reported back in 2012 and which guided

many of the recommendations in the Strategy.

The sector is also guided by the importance

of the renewable sector to Britain's longterm

economic plan. It was Government Minister

Greg Barker from the DECC who called it the

"renewables revolution" when addressing a

group of major international investors at an

event hosted by the Royal Bank of Canada in

The energy sector, he said, is at the heart of

the long-term plan - and he noted that in

of new money entering the renewables

While the EU had seen renewables investment drop

was dramatically different growing by 20%

With the passing of the Energy Act in

December 2013 with its radical new

and the certainty that gives developers, he

in the UK and not overseas."

The challenge of ensuring that there is

maximum opportunity to develop a

in the lower tiers, is a key focus of

Formed in early 2012 on the back of multiple announcements from

Equipment Manufacturers of their intentions to

invest in new facilities in the UK,

the group's membership, which includes

generator manufacturers, is able to offer

valuable insight into the task of ensuring

the manufacturing inputs to existing and

future facilities maximise the benefit to the

A key initial function of the group in 2012

was to guide and shape the design and

development of the GROW: Offshore

The group has held regular meetings with

the GROW team including a workshop

companies they have been engaging with to

gain insight into the likelihood of follow-up

leads with other lower tier suppliers.

and some did not take

The group was crucially consulted to support

Government's consultation on the establishment of an Offshore

below), both of which outline actions to

secure the UK's support industrial base

in face of competition for investment from

The confirmation of strike prices in early

2014 and the subsequent awarding of

FID-enabling contracts has led to

increased optimism on the likelihood of

investment in manufacturing facilities, evidenced by Siemens £160m investment at

Green Port Hull, and the group is now

assessing the detailed requirements for

wind supply chain, and is supporting

development of supply chains in the

Photo courtesy Siemens - the company is on