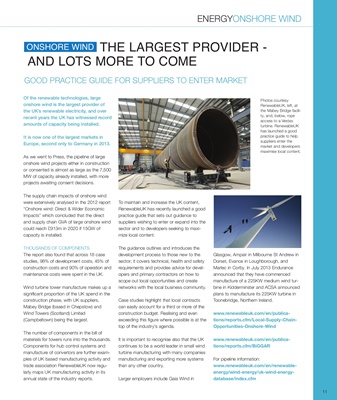 Of the renewable technologies, large

onshore wind is the largest provider of

the UK's renewable electricity, and over

amounts of capacity being installed.

It is now one of the largest markets in

As we went to Press, the pipeline of large

onshore wind projects either in construction

or consented is almost as large as the 7,500

were extensively analysed in the 2012 report

Impacts" which concluded that the direct

The report also found that across 18 case

construction costs and 90% of operation and

maintenance costs were spent in the UK.

significant proportion of the UK spend in the

Mabey Bridge (based in Chepstow) and

(Campbeltown) being the largest.

The number of components in the bill of

materials for towers runs into the thousands.

Components for hub control systems and

annual state of the industry reports.

RenewableUK has recently launched a good

practice guide that sets out guidance to

suppliers wishing to enter or expand into the

sector and to developers seeking to maximize

The guidance outlines and introduces the

development process to those new to the

requirements and provides advice for developers and primary

contractors on how to

scope out local opportunities and create

networks with the local business community.

can easily account for a third or more of the

construction budget. Realising and even

exceeding this figure where possible is at the

top of the industry's agenda.

It is important to recognise also that the UK

continues to be a world leader in small wind

turbine manufacturing with many companies

than any other country.

Larger employers include Gaia Wind in

Dorset, Evance in Loughborough, and

Marlec in Corby. In July 2013 Endurance

announced that they have commenced

manufacture of a 225KW medium wind turbine in Kidderminster

plans to manufacture its 225KW turbine in

AND LOTS MORE TO COME

the Mabey Bridge facility, and, below,

has launched a good