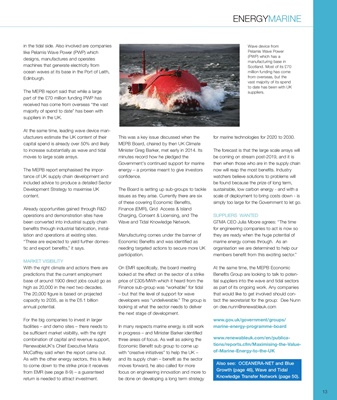 The forecast is that the large scale arrays will

then when those who are in the supply chain

now will reap the most benefits. Industry

watchers believe solutions to problems will

be found because the prize of long term,

sustainable, low carbon energy - and with a

scale of deployment to bring costs down - is

simply too large for the Government to let go.

for engineering companies to act is now so

they are ready when the huge potential of

marine energy comes through. As an

organisation we are determined to help our

members benefit from this exciting sector."

At the same time, the MEPB Economic

Benefits Group are looking to talk to potential suppliers into

the wave and tidal sectors

as part of its ongoing work. Any companies

for the group: Dee Nunn

in the tidal side. Also involved are companies

machines that generate electricity from

ocean waves at its base in the Port of Leith,

The MEPB report said that while a large

part of the £70 million funding PWP has

received has come from overseas "the vast

majority of spend to date" has been with

suppliers in the UK.

capital spend is already over 50% and likely

to increase substantially as wave and tidal

operations and demonstration sites have

been converted into industrial supply chain

"These are expected to yield further domestic and export

With the right climate and actions there are

predictions that the current employment

base of around 1900 direct jobs could go as

For the big companies to invest in larger

facilities - and demo sites - there needs to

be sufficient market visibility, with the right

combination of capital and revenue support,

McCaffrey said when the report came out.

As with the other energy sectors, this is likely

to come down to the strike price it receives

return is needed to attract investment.

This was a key issue discussed when the

MEPB Board, chaired by then UK Climate

minutes record how he pledged the

energy - a promise meant to give investors

The Board is setting up sub-groups to tackle

issues as they arise. Currently there are six

of these covering Economic Benefits,

Charging, Consent & Licensing, and The

Manufacturing comes under the banner of

Economic Benefits and was identified as

On EMR specifically, the board meeting

looked at the effect on the sector of a strike

price of £305/MWh which it heard from the

Finance sub-group was "workable" for tidal

- but that the level of support for wave

developers was "undeliverable." The group is

looking at what the sector needs to deliver

the next stage of development.

In many respects marine energy is still work

in progress - and Minister Barker identified

three areas of focus. As well as asking the

with "creative initiatives" to help the UK -

and its supply chain - benefit as the sector

focus on engineering innovation and more to

be done on developing a long term strategy

(PWP) which has a

from overseas, but the

vast majority of its spend

to date has been with UK