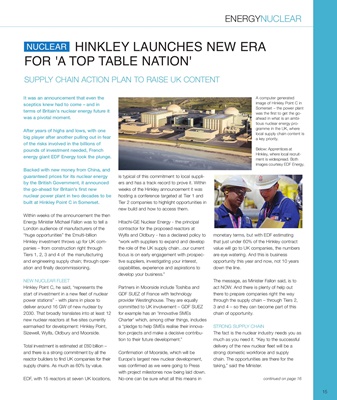 It was an announcement that even the

sceptics knew had to come - and in

was a pivotal moment.

After years of highs and lows, with one

big player after another pulling out in fear

of the risks involved in the billions of

Backed with new money from China, and

guaranteed prices for its nuclear energy

by the British Government, it announced

the go-ahead for Britain's first new

nuclear power plant in two decades to be

Within weeks of the announcement the then

Energy Minister Michael Fallon was to tell a

London audience of manufacturers of the

Hinkley investment throws up for UK companies - from

and engineering supply chain; through operation and finally decommissioning.

start of investment in a new fleet of nuclear

power stations" - with plans in place to

deliver around 16 GW of new nuclear by

Total investment is estimated at £60 billion -

and there is a strong commitment by all the

reactor builders to find UK companies for their

record to prove it. Within

weeks of the Hinkley announcement it was

hosting a conference targeted at Tier 1 and

Tier 2 companies to highlight opportunities in

contractor for the proposed reactors at

"work with suppliers to expand and develop

the role of the UK supply chain...our current

focus is on early engagement with prospective suppliers, investigating your interest,

capabilities, experience and aspirations to

Partners in Moorside include Toshiba and

GDF SUEZ of France with technology

provider Westinghouse. They are equally

for example has an 'Innovative SMEs

Charter' which, among other things, includes

a "pledge to help SMEs realise their innovation projects

and make a decisive contribution to

Confirmation of Moorside, which will be

was confirmed as we were going to Press

with project milestones now being laid down.

No-one can be sure what all this means in

that just under 60% of the Hinkley contract

value will go to UK companies, the numbers

are eye watering. And this is business

opportunity this year and now, not 10 years

The message, as Minister Fallon said, is to

act NOW. And there is plenty of help out

there to prepare companies right the way

through the supply chain - through Tiers 2,

The fact is the nuclear industry needs you as

much as you need it. "Key to the successful

delivery of the new nuclear fleet will be a

chain. The opportunities are there for the

FOR 'A TOP TABLE NATION'

image of Hinkley Point C in

in the UK, where

Hinkley, where local recruitment is widespread.