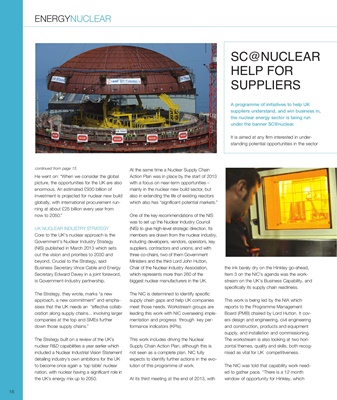 He went on: "When we consider the global

picture, the opportunities for the UK are also

enormous. An estimated £930 billion of

globally, with international procurement running at about £25 billion every

Core to the UK's nuclear approach is the

(NIS) published in March 2013 which sets

out the vision and priorities to 2030 and

beyond. Crucial to the Strategy, said

The Strategy, they wrote, marks "a new

approach, a new commitment" and emphasises that the UK needs an "effective

companies at the top and SMEs further

down those supply chains."

The Strategy built on a review of the UK's

detailing industry's own ambitions for the UK

to become once again a 'top table' nuclear

nation, with nuclear having a significant role in

At the same time a Nuclear Supply Chain

Action Plan was in place by the start of 2013

with a focus on near-term opportunities -

mainly in the nuclear new build sector, but

also in extending the life of existing reactors

which also has "significant potential markets."

One of the key recommendations of the NIS

was to set up the Nuclear Industry Council

(NIS) to give high-level strategic direction. Its

members are drawn from the nuclear industry,

suppliers, contractors and unions; and with

three co-chairs, two of them Government

Chair of the Nuclear industry Association,

which represents more than 260 of the

biggest nuclear manufacturers in the UK.

The NIC is determined to identify specific

meet those needs. Workstream groups are

leading this work with NIC overseeing implementation and progress

This work includes driving the Nuclear

Supply Chain Action Plan, although this is

not seen as a complete plan. NIC fully

expects to identify further actions in the evolution of this programme

the ink barely dry on the Hinkley go-ahead,

Item 3 on the NIC's agenda was the workstream

on the UK's Business Capability, and

This work is being led by the NIA which

reports to the Programme Management

Board (PMB) chaired by Lord Hutton. It covers design and engineering, civil engineering

and construction, products and equipment

supply, and installation and commissioning.

The workstream is also looking at two horizontal themes, quality and skills, both recognised

as vital for UK competitiveness.

The NIC was told that capability work needed to

window of opportunity for Hinkley, which

A programme of initiatives to help UK

suppliers understand, and win business in,

the nuclear energy sector is being run

It is aimed at any firm interested in understanding potential

opportunities in the sector