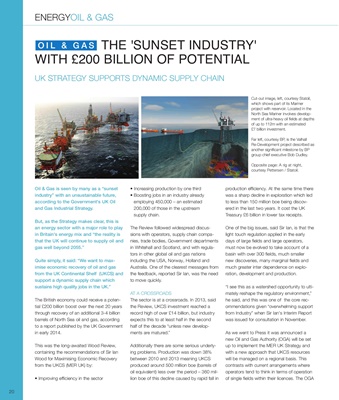 Oil & Gas is seen by many as a "sunset

industry" with an unsustainable future,

according to the Government's UK Oil

But, as the Strategy makes clear, this is

an energy sector with a major role to play

in Britain's energy mix and "the reality is

that the UK will continue to supply oil and

Quite simply, it said: "We want to maximise economic recovery

of oil and gas

from the UK Continental Shelf (UKCS) and

support a dynamic supply chain which

through recovery of an additional 3-4 billion

barrels of North Sea oil and gas, according

to a report published by the UK Government

This was the long-awaited Wood Review,

containing the recommendations of Sir Ian

• Improving efficiency in the sector

• Increasing production by one third

• Boosting jobs in an industry already

in Whitehall and Scotland, and with regulators

in other global oil and gas nations

including the USA, Norway, Holland and

Australia. One of the clearest messages from

the feedback, reported Sir Ian, was the need

the Review, UKCS investment reached a

record high of over £14 billion, but industry

expects this to at least half in the second

half of the decade "unless new developments are

Additionally there are some serious underlying problems.

produced around 500 million boe (barrels of

production efficiency. At the same time there

was a sharp decline in exploration which led

to less than 150 million boe being discovered

in the last two years. It cost the UK

One of the big issues, said Sir Ian, is that the

must now be evolved to take account of a

basin with over 300 fields, much smaller

new discoveries, many marginal fields and

much greater inter dependence on exploration,

"I see this as a watershed opportunity to ultimately

he said, and this was one of the core recommendations given "overwhelming

was issued for consultation in November.

As we went to Press it was announced a

new Oil and Gas Authority (OGA) will be set

up to implement the MER UK Strategy and

with a new approach that UKCS resources

will be managed on a regional basis. This

contrasts with current arrangements where

of single fields within their licences. The OGA

WITH £200 BILLION OF POTENTIAL

which shows part of its Mariner

project with reservoir. Located in the

of up to 112m with an estimated

another significant milestone by BP

Opposite page: A rig at night,