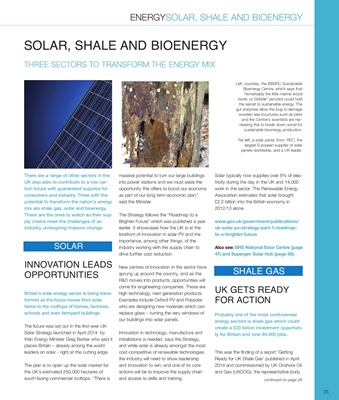 There are a range of other sectors in the

UK also able to contribute to a low carbon future

with guaranteed supplies for

consumers and industry. Three with the

potential to transform the nation's energy

farms to the rooftops of homes, factories,

schools and even farmyard buildings.

The future was set out in the first-ever UK

Solar Strategy launched in April 2014 by

then Energy Minister Greg Barker who said it

places Britain - already among the world

leaders on solar - right at the cutting edge.

The plan is to open up the solar market for

south facing commercial rooftops. "There is

into power stations and we must seize the

opportunity this offers to boost our economy

as part of our long term economic plan,"

The Strategy follows the "Roadmap to a

Brighter Future" which was published a year

earlier. It showcases how the UK is at the

forefront of innovation in solar PV and the

importance, among other things, of the

industry working with the supply chain to

New centres of innovation in the sector have

sprung up around the country, and as the

R&D moves into products, opportunities will

come for engineering companies. These are

Examples include Oxford PV and Polysolar

who are designing new materials which can

our buildings into solar panels.

Innovation in technology, manufacture and

installations is needed, says the Strategy,

and while solar is already amongst the most

the industry will need to show leadership

and innovation to win; and one of its core

actions will be to improve the supply chain

Solar typically now supplies over 8% of electricity during the day in the UK and 14,000

work in the sector. The Renewable Energy

£2.2 billion into the British economy in

Probably one of the most controversial

energy sectors is shale gas which could

create a £33 billion investment opportunity for Britain and over 64,000 jobs.

This was the finding of a report 'Getting

2014 and commissioned by UK Onshore Oil

and Gas (UKOOG), the representative body

Bioenergy Centre, which says that

borer, or Gribble" pictured could hold

the secret to sustainable energy. The

wooden sea structures such as piers

and the Centre's scientists are harnessing this to

break down wood for

Far left, a solar panel, from REC, the

panels worldwide, and a UK leader.