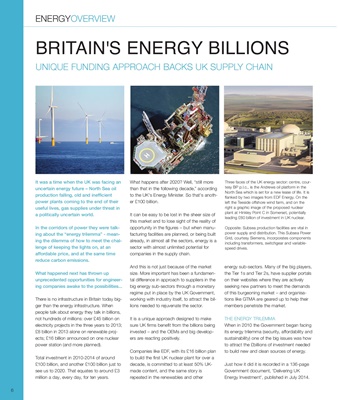 It was a time when the UK was facing an

power plants coming to the end of their

the dilemma of how to meet the challenge

of keeping the lights on, at an

affordable price, and at the same time

What happened next has thrown up

unprecedented opportunities for engineering companies awake to the possibilities...

There is no infrastructure in Britain today bigger than the energy

people talk about energy they talk in billions,

not hundreds of millions: over £45 billion on

electricity projects in the three years to 2013;

£8 billion in 2013 alone on renewable projects; £16 billion announced on one nuclear

million a day, every day, for ten years.

than that in the following decade," according

to the UK's Energy Minister. So that's another £100 billion.

this market and to lose sight of the reality of

opportunity in the figures - but when manufacturing facilities are

planned, or being built

already, in almost all the sectors, energy is a

sector with almost unlimited potential for

companies in the supply chain.

And this is not just because of the market

size. More important has been a fundamental difference

in approach to suppliers in the

big energy sub-sectors through a monetary

regime put in place by the UK Government,

working with industry itself, to attract the billions needed to

It is a unique approach designed to make

sure UK firms benefit from the billions being

invested - and the OEMs and big developers are

to build the first UK nuclear plant for over a

and the same story is

repeated in the renewables and other

energy sub-sectors. Many of the big players,

the Tier 1s and Tier 2s, have supplier portals

on their websites where they are actively

GTMA are geared up to help their

When in 2010 the Government began facing

its energy trilemma (security, affordability and

sustainability) one of the big issues was how

to attract the £billions of investment needed

to build new and clean sources of energy.

Just how it did it is recorded in a 136-page

BP p.l.c., is the Andrews oil platform in the

North Sea which is set for a new lease of life. It is

flanked by two images from EDF Energy. On the

left the Teeside offshore wind farm, and on the

right a graphic image of the proposed nuclear

Opposite: Subsea production facilities are vital in

including transformers, switchgear and variablespeed drives.