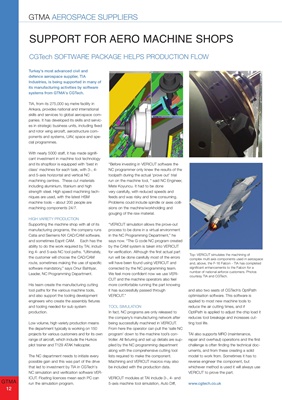 Turkey's most advanced civil and

Industries, is being supported in many of

its manufacturing activities by software

in strategic business units, including fixed

With nearly 5000 staff, it has made significant investment in machine tool technology

and its shopfloor is equipped with 'best in

and 5-axis horizontal and vertical NC

including aluminium, titanium and high

used, with the latest HSM

machine tools - about 200 people are

Supporting the machine shop with all of its

and sometimes Esprit CAM. Each has the

ability to do the work required by TAI, including 4- and 5-axis NC tool paths. "Ultimately,

the customer will choose the CAD/CAM

route, sometimes making the use of specific

His team create the manufacturing cutting

and also support the tooling development

engineers who create the assembly fixtures

and tooling needed for sub system

the department typically is working on 150

projects for various customers and for its own

range of aircraft, which include the Hurkos

The NC department needs to initiate every

possible gain and this was part of the drive

that led to investment by TIA in CGTech's

Floating licences mean each PC can

"Before investing in VERICUT software the

NC programmer only knew the results of the

toolpath during the actual 'prove out' trial

Mete Koyuncu. It had to be done

very carefully, with reduced speeds and

feeds and was risky and time consuming.

gouging of the raw material.

process to be done in a virtual environment

in the NC Programming Department," he

by the CAM system is taken into VERICUT

for verification. Although the first actual part

run will be done carefully most of the errors

will have been found using VERICUT and

corrected by the NC programming team.

it has successfully passed through

In fact, NC programs are only released to

the company's manufacturing network after

being successfully machined in VERICUT.

From here the operator can pull the 'safe NC

program' down to the machine tool's controller.

along with the comprehensive cutting tool

lists required to make the component.

Machining and VERICUT macros may also

be included with the production data.

VERICUT modules at TAI include 3-, 4- and

optimisation software. This software is

applied to most new machine tools to

reduce the air cutting times, and if

OptiPath is applied to adjust the chip load it

repair and overhaul) operations and the first

challenge is often finding the technical documents, and from

these creating a solid

model to work from. Sometimes it has to

reverse engineer the component, but

whichever method is used it will always use

VERICUT to prove the part.

Top: VERICUT simulates the machining of

and, above, the F-16 Falcon - TIA has completed

significant enhancements to the Falcon for a