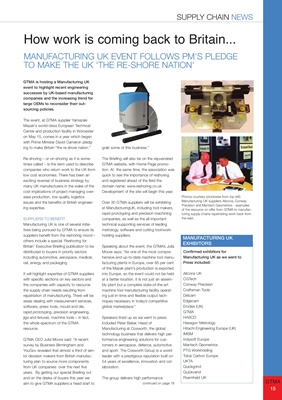 GTMA is hosting a Manufacturing UK

companies and the increasing trend for

large OEMs to reconsider their outsourcing

The event, at GTMA supplier Yamazaki

Centre and production facility in Worcester

on May 15, comes in a year which began

companies who return work to the UK from

low cost economies. There has been an

exciting reversal of business strategy by

many UK manufacturers in the wake of the

issues and the benefits of British engineering expertise.

suppliers benefit from the reshoring mood -

others include a special 'Reshoring for

Britain' Executive Briefing publication to be

distributed to buyers in priority sectors

It will highlight expertise of GTMA suppliers

with specific sections on key sectors and

the companies with capacity to resource

the supply chain needs resulting from

repatriation of manufacturing. There will be

the whole spectrum of the GTMA

survey by Business Birmingham and

YouGov revealed that almost a third of senior decision makers from

from UK companies over the next five

years. By getting our special Briefing out

and on the desks of buyers this year we

aim to give GTMA suppliers a head start to

grab some of this business."

The Briefing will also be on the rejuvenated

GTMA website, with Home Page promotion. At the same time, the association was

quick to see the importance of reshoring

and registered ahead of the field the

Development of the site will begin this year.

Over 30 GTMA suppliers will be exhibiting

at ManufacturingUK, including tool makers,

companies, as well as the all important

Speaking about the event, the GTMA's Julia

Moore says: "As one of the most comprehensive and up-to-date machine tool manufacturing

of the Mazak plant's production is exported

into Europe, so the event could not be held

at a better location. It is not just an assembly plant but a complete state-of-the-art

Speakers lined up as we went to press

Manufacturing at Cosworth, the global

and sport. The Cosworth Group is a world

leader with a prestigious reputation built on

54 years of excellence, innovation and collaboration.

Manufacturing UK as we went to

How work is coming back to Britain...

TO MAKE THE UK 'THE RE-SHORE NATION'