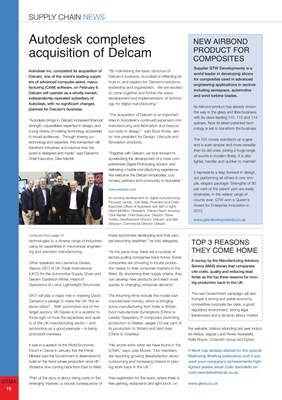 technologies to a diverse range of industries

using its capabilities in mechanical engineering and precision

Other speakers are Lawrence Davies,

(UKTI) for the Automotive Supply Chain and

UKTI will play a major role in meeting David

Cameron's pledge to make the UK "the reshore

nation". With automotive one of the

target sectors, Mr Davies is in a position to

automotive as a good example - is being

It was in a speech to the World Economic

Forum in Davos in January that the Prime

Minister said the Government is determined to

build on the trend where production once offshored

is now coming back from East to West.

"Part of the story is about rising costs in the

emerging markets, a natural consequence of

"At the same time, there are a number of

factors pulling companies back home. Some

to their consumer markets in the

West. By shortening their supply chains, they

The returning firms include the model train

manufacturer Hornby, which is bringing

some manufacturing from India to Britain;

production to Wales); Jaeger (10 per cent of

its production to Britain) and Vent Axia

"His words echo what we have found in the

are reporting growing dissatisfaction about

outsourcing and increasing interest in placing work back in the UK."

Free registration for the event, where there is

• Work has already started on the special

Reshoring Briefing publication and if you

A survey by the Manufacturing Advisory

times as the top three reasons for moving production

The new Government campaign will also

trumpet a strong and stable economy,

frameworks and a dynamic labour market.

Autodesk Inc. completed its acquisition of

Delcam, one of the world's leading suppliers of advanced computer-aided

Delcam will operate as a wholly-owned,

Autodesk, with no significant changes

strength, unparalleled expertise in design, and

to broad audiences. Through sharing our

technology and expertise, this transaction will

transform industries and improve how the

world is designed and made," said Delcam's

"By maintaining the basic structure of

Delcam's business, Autodesk is reflecting its

trust in, and respect for, Delcam's solutions,

leadership and organisation. We are excited

to come together and further the vision,

development and implementation of technology for digital manufacturing."

"The acquisition of Delcam is an important

step in Autodesk's continued expansion into

manufacturing and fabrication and beyond

for Design, Lifecycle and

"Together with Delcam, we look forward to

accelerating the development of a more comprehensive

We welcome the Delcam employees, customers, partners and community to Autodesk."

An exciting development for digital manufacturing:

Executive Officer of Autodesk with (left to right)

Supplier GTW Developments is a

for composites used in advanced

Its Airbond product has already shown

the way in the glass and fibre business,

splicers. Now its latest patented technology is set to transform the business.

The 701 moves standards up a gear

and is even simpler and more versatile

than its old ones, joining a huge range

of counts in modern fibres. It is also

lighter, handier and quicker to maintain.

It represents a leap forward in design,

out-performing all others in one simple, elegant package. Strengths

per cent of the parent yarn are easily

attainable, in the widest range of

counts ever. GTW won a Queen's

Award for Enterprise Innovation in