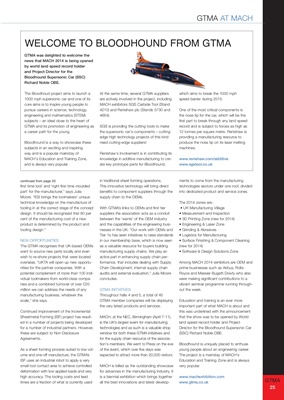 part' for the manufacturer," says Julia

technical knowledge on the manufacture of

tooling in at the correct stage of the concept

design. It should be recognised that 80 per

cent of the manufacturing cost of a new

product is determined by the product and

The GTMA recognises that UK-based OEMs

want to source new parts locally and even

wish to re-shore projects that were located

overseas. "UKTA will open up new opportunities for the partner companies. With

potential complement of more than 100 individual toolmakers from

world-class companies and a combined turnover

million we can address the needs of any

manufacturing business, whatever the

Continued improvement of the Incremental

Sheetmetal Forming (ISF) project has resulted in a number of projects

for a number of industrial partners. However,

these are subject to Non Disclosure

ISF uses an industrial robot to apply a very

times are a fraction of what is currently used

This innovative technology will bring direct

benefits to component suppliers through the

supply chain to the OEMs.

With GTMA's links to OEMs and first tier

suppliers the association acts as a conduit

between the 'wants' of the OEM industry

and the capabilities of the engineering businesses in the UK. "Our work with OEMs and

in our membership base, which is now seen

as a valuable resource for buyers building

manufacturing supply chains. We play an

GTMA member companies will be displaying

the very latest products and services.

is the UK's largest event for manufacturing

technologies and as such is a valuable shop

window for both these GTMA initiatives and

for the supply chain resource of the association's members. We

went to Press on the eve

of the event, which over five days was

expected to attract more than 20,000 visitors.

MACH is billed as the outstanding showcase

for advances in the manufacturing industry. It

is a biennial exhibition which brings together

all the best innovations and latest developments to come from

technologies sectors under one roof, divided

into dedicated product and service zones.

Among MACH 2014 exhibitors are OEM and

prime businesses such as Airbus, RollsRoyce and Messier Bugatti Dowty who also

were making significant contributions to a

Education and training is an ever more

important part of what MACH is about and

this was underlined with the announcement

that the show was to be opened by World

Director for the Bloodhound Supersonic Car

Bloodhound is uniquely placed to enthuse

young people about an engineering career.

The project is a mainstay of MACH's

Education and Training Zone and is always

GTMA was delighted to welcome the

news that MACH 2014 is being opened

and Project Director for the

The Bloodhoud project aims to launch a

1000 mph supersonic car and one of its

core aims is to inspire young people to

subjects - an ideal close to the heart of

GTMA and its promotion of engineering as

a career path for the young.

Bloodhound is a way to showcase these

subjects in an exciting and inspiring

way and is a popular mainstay of

and is always very popular.

are actively involved in the project, including

SGS is providing the cutting tools to make

Renishaw's involvement is in contributing its

One of the most critical components is

the nose tip for the car, which will be the

first part to break through any land speed

record and is subject to forces as high as

12 tonnes per square metre. Renishaw is

providing a manufacturing resource to

produce the nose tip on its laser melting

WELCOME TO BLOODHOUND FROM GTMA