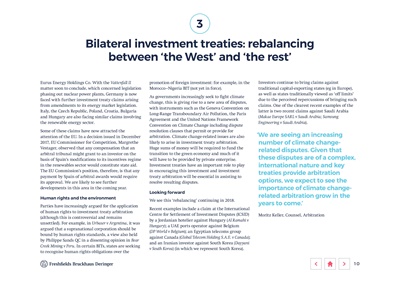 from amendments to its energy market legislation.

Some of these claims have now attracted the

attention of the EU. In a decision issued in December

Vestager, observed that any compensation that an

arbitral tribunal might grant to an investor on the

basis of Spain's modifications to its incentives regime

in the renewables sector would constitute state aid.

The EU Commission's position, therefore, is that any

payment by Spain of arbitral awards would require

its approval. We are likely to see further

developments in this area in the coming year.

Human rights and the environment

Parties have increasingly argued for the application

(although this is controversial and remains

unsettled). For example, in Urbaser v Argentina, it was

argued that a supranational corporation should be

by Philippe Sands QC in a dissenting opinion in Bear

to recognise human rights obligations over the

promotion of foreign investment: for example, in the

Morocco-Nigeria BIT (not yet in force).

change, this is giving rise to a new area of disputes,

with instruments such as the Geneva Convention on

Agreement and the United Nations Framework

Convention on Climate Change including dispute

resolution clauses that permit or provide for

Huge sums of money will be required to fund the

transition to the green economy and much of it

will have to be provided by private enterprise.

Investment treaties have an important role to play

treaty arbitration will be essential in assisting to

We see this 'rebalancing' continuing in 2018.

Recent examples include a claim at the International

by a Jordanian hotelier against Hungary (Al Ramahi v

and an Iranian investor against South Korea (Dayyani

Investors continue to bring claims against

as well as states traditionally viewed as 'off limits'

due to the perceived repercussions of bringing such

claims. One of the clearest recent examples of the

' We are seeing an increasing

these disputes are of a complex,

options, we expect to see the

arbitration grow in the

between 'the West' and 'the rest'