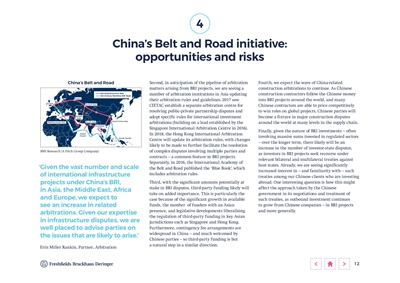 Second, in anticipation of the pipeline of arbitration

matters arising from BRI projects, we are seeing a

their arbitration rules and guidelines. 2017 saw

arbitrations (building on a lead established by the

In 2018, the Hong Kong International Arbitration

Centre will update its arbitration rules, with changes

likely to be made to further facilitate the resolution

Separately, in 2016, the International Academy of

the Belt and Road published the 'Blue Book', which

Third, with the significant amounts potentially at

take on added importance. This is particularly the

case because of the significant growth in available

funds, the number of funders with an Asian

the regulation of third-party funding in key Asian

jurisdictions such as Singapore and Hong Kong.

widespread in China - and much welcomed by

Chinese parties - so third-party funding is but

a natural step in a similar direction.

Fourth, we expect the wave of China-related

construction arbitrations to continue. As Chinese

into BRI projects around the world, and many

to win roles on global projects, Chinese parties will

around the world at many levels in the supply chain.

Finally, given the nature of BRI investments - often

- over the longer term, there likely will be an

increase in the number of investor-state disputes,

as investors in BRI projects seek recourse under

relevant bilateral and multilateral treaties against

increased interest in - and familiarity with - such

treaties among our Chinese clients who are investing

affect the approach taken by the Chinese

government in its negotiations and treatment of

such treaties, as outbound investment continues

to grow from Chinese companies - in BRI projects

' Given the vast number and scale

in Asia, the Middle East, Africa

and Europe, we expect to

see an increase in related

arbitrations. Given our expertise

in infrastructure disputes, we are

well placed to advise parties on

the issues that are likely to arise.'