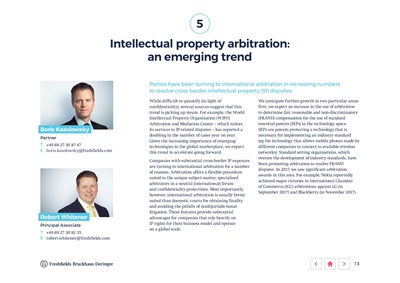 Parties have been turning to international arbitration in increasing numbers

While difficult to quantify (in light of

confidentiality), several sources suggest that this

trend is picking up steam. For example, the World

Arbitration and Mediation Center - which tailors

its services to IP-related disputes - has reported a

doubling in the number of cases year on year.

Given the increasing importance of emerging

technologies in the global marketplace, we expect

this trend to accelerate going forward.

are turning to international arbitration for a number

arbitrators in a neutral (international) forum

and confidentiality protections. Most importantly,

however, international arbitration is usually better

and avoiding the pitfalls of multijurisdictional

advantages for companies that rely heavily on

IP rights for their business model and operate

on a global scale.

first, we expect an increase in the use of arbitration

to determine fair, reasonable and non-discriminatory

(FRAND) compensation for the use of standard

SEPs are patents protecting a technology that is

necessary for implementing an industry standard

(eg the technology that allows mobile phones made by

oversee the development of industry standards, have

been promoting arbitration to resolve FRAND

disputes. In 2017, we saw significant arbitration

awards in this area. For example, Nokia reportedly

of Commerce (ICC) arbitrations against LG (in