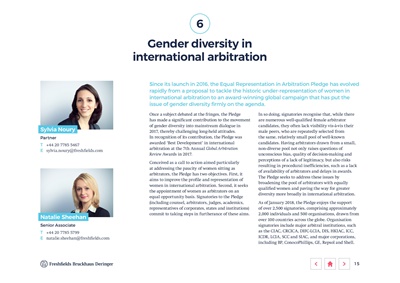 Since its launch in 2016, the Equal Representation in Arbitration Pledge has evolved

issue of gender diversity firmly on the agenda.

Once a subject debated at the fringes, the Pledge

has made a significant contribution to the movement

of gender diversity into mainstream dialogue in

In recognition of its contribution, the Pledge was

Conceived as a call to action aimed particularly

at addressing the paucity of women sitting as

arbitrators, the Pledge has two objectives. First, it

aims to improve the profile and representation of

the appointment of women as arbitrators on an

representatives of corporates, states and institutions)

commit to taking steps in furtherance of these aims.

In so doing, signatories recognise that, while there

male peers, who are repeatedly selected from

candidates. Having arbitrators drawn from a small,

non-diverse pool not only raises questions of

unconscious bias, quality of decision-making and

perceptions of a lack of legitimacy, but also risks

resulting in procedural inefficiencies, such as a lack

of availability of arbitrators and delays in awards.

The Pledge seeks to address these issues by

broadening the pool of arbitrators with equally

qualified women and paving the way for greater

As of January 2018, the Pledge enjoys the support

of over 2,500 signatories, comprising approximately

2,000 individuals and 500 organisations, drawn from

over 100 countries across the globe. Organisation

signatories include major arbitral institutions, such