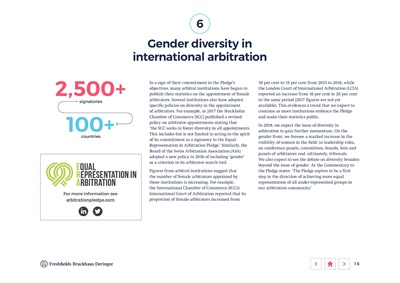 In a sign of their commitment to the Pledge's

objectives, many arbitral institutions have begun to

publish their statistics on the appointment of female

specific policies on diversity in the appointment

of arbitrators. For example, in 2017 the Stockholm

'the SCC seeks to foster diversity in all appointments.

This includes but is not limited to acting in the spirit

of its commitment as a signatory to the Equal

Representation in Arbitration Pledge.' Similarly, the

Board of the Swiss Arbitration Association (ASA)

as a criterion in its arbitrator search tool.

Figures from arbitral institutions suggest that

the number of female arbitrators appointed by

those institutions is increasing. For example,

the International Chamber of Commerce (ICC)'s

International Court of Arbitration reported that its

proportion of female arbitrators increased from

reported an increase from 16 per cent to 20 per cent

in the same period (2017 figures are not yet

available). This evidences a trend that we expect to

and make their statistics public.

In 2018, we expect the issue of diversity in

arbitration to gain further momentum. On the

gender front, we foresee a marked increase in the

visibility of women in the field: in leadership roles,

panels of arbitrators and, ultimately, tribunals.

We also expect to see the debate on diversity broaden

beyond the issue of gender. As the Commentary to

the Pledge states: 'The Pledge aspires to be a first

step in the direction of achieving more equal

representation of all under-represented groups in