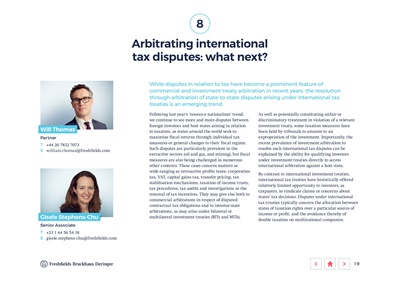 commercial and investment treaty arbitration in recent years, the resolution

through arbitration of state-to-state disputes arising under international tax

treaties is an emerging trend.

we continue to see more and more disputes between

to taxation, as states around the world seek to

measures or general changes to their fiscal regime.

Such disputes are particularly prevalent in the

extractive sectors (oil and gas, and mining), but fiscal

measures are also being challenged in numerous

other contexts. These cases concern matters as

tax procedures, tax audits and investigations or the

removal of tax incentives. They may give rise both to

commercial arbitrations in respect of disputed

contractual tax obligations and to investor-state

arbitrations, as may arise under bilateral or

As well as potentially constituting unfair or

discriminatory treatment in violation of a relevant

investment treaty, some taxation measures have

been held by tribunals to amount to an

expropriation of the investment. Importantly, the

recent prevalence of investment arbitration to

resolve such international tax disputes can be

explained by the ability for qualifying investors

international arbitration against a host state.

By contrast to international investment treaties,

relatively limited opportunity to investors, as

taxpayers, to vindicate claims or concerns about

states of taxation rights over a particular source of

income or profit, and the avoidance thereby of

tax disputes: what next?