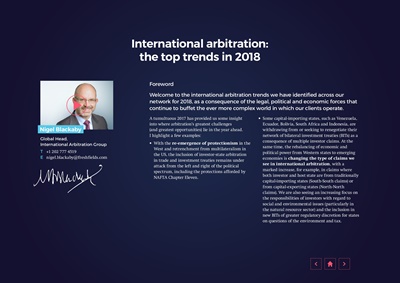 Welcome to the international arbitration trends we have identified across our

network for 2018, as a consequence of the legal, political and economic forces that

continue to buffet the ever more complex world in which our clients operate.

A tumultuous 2017 has provided us some insight

into where arbitration's greatest challenges

(and greatest opportunities) lie in the year ahead.

I highlight a few examples:

• With the re-emergence of protectionism in the

West and retrenchment from multilateralism in

the US, the inclusion of investor-state arbitration

in trade and investment treaties remains under

attack from the left and right of the political

spectrum, including the protections afforded by

• Some capital-importing states, such as Venezuela,

withdrawing from or seeking to renegotiate their

network of bilateral investment treaties (BITs) as a

consequence of multiple investor claims. At the

same time, the rebalancing of economic and

economies is changing the type of claims we

see in international arbitration, with a

marked increase, for example, in claims where

both investor and host state are from traditionally

claims). We are also seeing an increasing focus on

the responsibilities of investors with regard to

social and environmental issues (particularly in

the natural resource sector) and the inclusion in

on questions of the environment and tax.