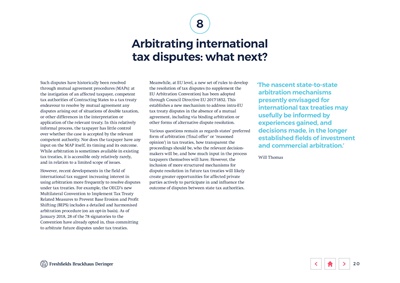 Such disputes have historically been resolved

through mutual agreement procedures (MAPs): at

the instigation of an affected taxpayer, competent

tax authorities of Contracting States to a tax treaty

endeavour to resolve by mutual agreement any

disputes arising out of situations of double taxation,

or other differences in the interpretation or

application of the relevant treaty. In this relatively

over whether the case is accepted by the relevant

competent authority. Nor does the taxpayer have any

input on the MAP itself, its timing and its outcome.

While arbitration is sometimes available in existing

tax treaties, it is accessible only relatively rarely,

and in relation to a limited scope of issues.

However, recent developments in the field of

under tax treaties. For example, the OECD's new

Related Measures to Prevent Base Erosion and Profit

arbitration procedure (on an opt-in basis). As of

Meanwhile, at EU level, a new set of rules to develop

the resolution of tax disputes (to supplement the

EU Arbitration Convention) has been adopted

tax treaty disputes in the absence of a mutual

agreement, including via binding arbitration or

other forms of alternative dispute resolution.

opinion') in tax treaties, how transparent the

proceedings should be, who the relevant decisionmakers

will be, and how much input in the process

taxpayers themselves will have. However, the

inclusion of more structured mechanisms for

parties actively to participate in and influence the

usefully be informed by

decisions made, in the longer

tax disputes: what next?