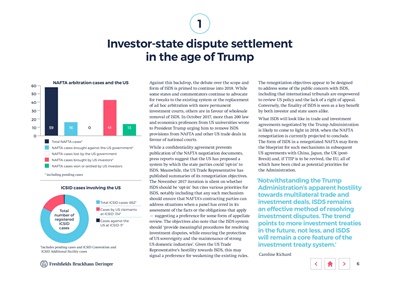 Against this backdrop, the debate over the scope and

form of ISDS is primed to continue into 2018. While

some states and commentators continue to advocate

for tweaks to the existing system or the replacement

investment courts, others are in favour of wholesale

and economics professors from US universities wrote

to President Trump urging him to remove ISDS

provisions from NAFTA and other US trade deals in

While a confidentiality agreement prevents

publication of the NAFTA negotiation documents,

press reports suggest that the US has proposed a

system by which the state parties could 'opt-in' to

ISDS. Meanwhile, the US Trade Representative has

published summaries of its renegotiation objectives.

The November 2017 iteration is silent on whether

ISDS should be 'opt-in' but cites various priorities for

ISDS, notably including that any such mechanism

should ensure that NAFTA's contracting parties can

address situations when a panel has erred in its

assessment of the facts or the obligations that apply

- suggesting a preference for some form of appellate

review. The objectives also note that the ISDS system

should 'provide meaningful procedures for resolving

investment disputes, while ensuring the protection

of US sovereignty and the maintenance of strong

US domestic industries'. Given the US Trade

Representative's hostility towards ISDS, this may

signal a preference for weakening the existing rules.

The renegotiation objectives appear to be designed

to address some of the public concern with ISDS,

including that international tribunals are empowered

to review US policy and the lack of a right of appeal.

Conversely, the finality of ISDS is seen as a key benefit

by both investor and state users alike.

What ISDS will look like in trade and investment

agreements negotiated by the Trump Administration

is likely to come to light in 2018, when the NAFTA

renegotiation is currently projected to conclude.

The form of ISDS in a renegotiated NAFTA may form

the blueprint for such mechanisms in subsequent

US agreements with China, Japan, the UK (postBrexit)

and, if TTIP is to be revived, the EU, all of

which have been cited as potential priorities for

in the age of Trump

NAFTA cases brought against the US government*

NAFTA cases lost by the US government

NAFTA cases brought by US investors*

NAFTA cases won or settled by US investors

Cases by US claimants

towards multilateral trade and

an effective method of resolving

in the future, not less, and ISDS

will remain a core feature of the

NAFTA arbitration cases and the US

ICSID cases involving the US