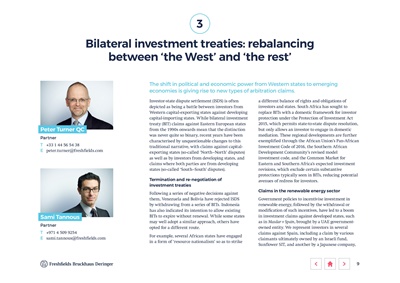 economies is giving rise to new types of arbitration claims.

depicted as being a battle between investors from

from the 1990s onwards mean that the distinction

was never quite so binary, recent years have been

characterised by unquestionable changes to this

traditional narrative, with claims against capitalexporting

as well as by investors from developing states, and

claims where both parties are from developing

Termination and re-negotiation of

Following a series of negative decisions against

them, Venezuela and Bolivia have rejected ISDS

by withdrawing from a series of BITs. Indonesia

has also indicated its intention to allow existing

BITs to expire without renewal. While some states

may well adopt a similar approach, others have

opted for a different route.

in a form of 'resource nationalism' so as to strike

a different balance of rights and obligations of

investors and states. South Africa has sought to

replace BITs with a domestic framework for investor

protection under the Protection of Investment Act

but only allows an investor to engage in domestic

mediation. These regional developments are further

exemplified through the African Union's Pan-African

Investment Code of 2016, the Southern African

investment code, and the Common Market for

avenues of redress for investors.

Claims in the renewable energy sector

Government policies to incentivise investment in

renewable energy, followed by the withdrawal or

modification of such incentives, have led to a boom

in investment claims against developed states, such

as in Masdar v Spain, brought by a UAE governmentowned

entity. We represent investors in several

claims against Spain, including a claim by various

Sunflower SIT, and another by a Japanese company,

between 'the West' and 'the rest'