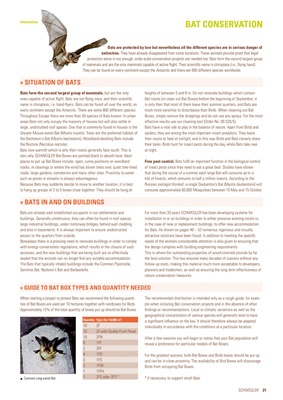 of Bat Boxes are used per 10 hectares together with nestboxes for Birds.

Approximately 15% of the total quantity of boxes put up should be Bat Boxes.

The recommended distribution is intended only as a rough guide, for example when initiating Bat conservation projects and in the absence of other

findings or recommendations. Local or climatic variations as well as the

geographical concentration of various species will generally tend to have

a significant influence on the key. It should therefore always be adapted

individually in accordance with the conditions at a particular location.

reveal a preference for particular models of Bat Boxes.

For the greatest success, both Bat Boxes and Birds boxes should be put up

and can be in close proximity. The availability of Bird Boxes will discourage

* if necessary, to support small Bats

extinction. They have already disappeared from some locations. These animals provide proof that legal

of mammals and are the only mammals capable of active flight. Their scientific name is chiroptera (i.e., flying hand).

They can be found on every continent except the Antarctic and there are 900 different species worldwide.

Bats form the second largest group of mammals, but are the only

ones capable of active flight. Bats are not flying mice, and their scientific

name is chiroptera, i.e. hand-flyers. Bats can be found all over the world, on

every continent except the Antarctic. There are some 800 different species.

Throughout Europe there are more than 30 species of Bats known. In urban

large, undisturbed roof spaces. One that is commonly found in houses is the

Bats love warmth which is why their roosts generally face south. This is

places to put up Bat Boxes include: open, sunny positions on woodland

tracks, in clearings or where the wind has blown trees over, quiet tree-lined

roads, large gardens, cemeteries and many other sites. Proximity to water

such as ponds or streams is always advantageous.

Because Bats may suddenly decide to move to another location, it is best

to hang up groups of 3 to 5 boxes close together. They should be hung at

heights of between 3 and 6 m. Do not renovate buildings which contain

Bat roosts (or clean out Bat Boxes) before the beginning of September; it

is only then that most of them leave their summer quarters, and Bats are

much more sensitive to disturbance than Birds. When cleaning out Bat

Boxes, simply remove the droppings and do not use any sprays. For the most

Bats have a vital role to play in the balance of nature. Apart from Birds and

spiders, they are among the most important insect predators. They leave

their roosts to feed at twilight, and in this way Birds and Bats cleverly share

their tasks: Birds hunt for insect pests during the day, while Bats take over

of insect pests since they need to eat a great deal. Studies have shown

kilo of Insects, which amounts to half a million insects. According to the

consume approximately 60,000 Mosquitoes between 15 May and 15 October.

Bats are already well established occupants in our settlements and

buildings. Generally unobtrusive, they can often be found in roof spaces,

and also in basements. It is always important to ensure unobstructed

with energy conservation regulations, which results in the closure of such

accesses, and the new buildings that are being built are so effectively

sealed that the animals can no longer find any suitable accommodation.

The Bats that typically inhabit buildings include the Common Pipistrelle,

For more than 30 years SCHWEGLER has been developing systems for

installation in or on buildings in order to either preserve existing roosts or,

in the case of new or replacement buildings, to offer new accommodation

for Bats. As shown on pages 46 - 53 numerous ingenious and visually

attractive solutions have been found. In addition to meeting the specific

the best solution. This has ensured many decades of success without any

follow-up costs, making this material much more acceptable to developers,

planners and tradesmen, as well as ensuring the long term effectiveness of

» BATS IN AND ON BUILDINGS