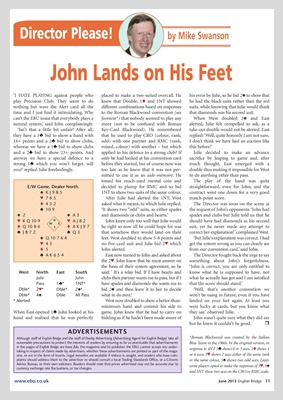 John Lands on His Feet

‘I HATE PLAYING against people who placed to make a two-suited overcall. He his error by Julie, so he bid 2´ to show that

play Precision Club. They seem to do knew that Double, 1t and 1NT showed he had the black suits rather than the red

nothing but wave the Alert card all the different combinations based on responses suits, while knowing that Julie would think

time and I just find it intimidating. Why to the Roman Blackwood convention (see that diamonds was his second suit.

natural system,’ said John complainingly. more (not to be confused with Roman alerted, Julie felt compelled to ask, as a

‘Isn’t that a little bit unfair? After all, Key-Card Blackwood). He remembered take-out double would not be alerted. East

they have a 1® bid to show a hand with that he used to play CRO (colour, rank, replied: ‘Well, quite honestly I am not sure,

16+ points and a 2® bid to show clubs, odd) with one partner and RMC (rank, I don’t think we have had an auction like

whereas we have a 1® bid to show clubs mixed, colour) with another – but which this before!’

and a 2® bid to show 23+ points. And applied to his defence to a strong club? If Julie decided to make an advance

anyway we have a special defence to a only he had looked at his convention card sacrifice by leaping to game and, after

strong 1® which you won’t forget, will before they started, but of course now was much thought, East emerged with a

you?’ replied Julie forebodingly. too late as he knew that it was not per- double thus making it impossible for West

mitted to use it as an aide-mémoire. He to do anything other than pass.

E/W Game. Dealer North. decided to plump for RMC and so bid straightforward, even for John, and the

´ KJ985 1NT to show two suits of the same colour. contract went one down for a very good

™ 765 After Julie had alerted the 1NT, West match-point score.

t 432 asked what it meant, to which Julie replied: The Director was soon on the scene at

´ 2 ´ A3 and diamonds or clubs and hearts.’ spades and clubs but Julie told us that he

® J872 ® Q3 that somehow they would land on their correct her explanation!’ complained West.

the 2™. John knew that he must answer on something about John’s forgetfulness.

the basis of their system agreement, so he ‘John is correct, you are only entitled to

West North East South said: ‘ It’s a relay bid. If I have hearts and know what he is supposed to have, not

Julie John clubs then partner wants me to pass, but if I what he actually has got and I am satisfied

Pass 1®* 1NT* have spades and diamonds she wants me to that the score should stand.’

Dble* 4´ Dble All Pass what to do next.’ won’t be using in future, even if you have

* Alerted West now doubled to show a better-than- landed on your feet again. At least you

minimum hand and commit his side to were lucky at cards, but you know what

When East opened 1® John looked at his game. John knew that he had to carry on they say,’ observed Julie.

but he knew it couldn’t be good. r

reasonable precautions to protect the interests of readers by ensuring as far as practicable that advertisements Blue Team in the 1960s. In the original version, in

in the pages of English Bridge are bona fide, the magazine and its publisher, the EBU, cannot accept any under-

taking in respect of claims made by advertisers, whether these advertisements are printed as part of the maga-

zine, or are in the form of inserts. Legal remedies are available if redress is sought, and readers who have com- or 4 aces, 5™ shows 2 aces either of the same rank

plaints should address them to the advertiser or should consult a local Trading Standards Office, or a Citizens or the same colour, 5´ shows two odd aces. Later,

Advice Bureau, or their own solicitors. Readers should note that prices advertised may not be accurate due to

some players opted to make the responses of 5™, 5´

and 5NT show two aces on the CRO or RMC scale.