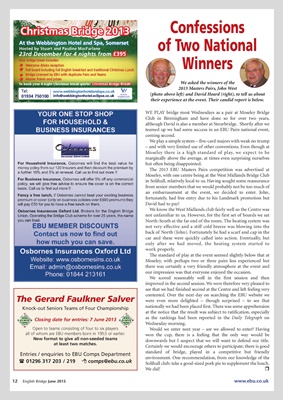 At the Webbington Hotel and Spa, Somerset

Hosted by Stuart and Pauline MacFarlane

Full board including full English breakfast and traditional Christmas Lunch

Bridge Licensed by EBU with duplicate Pairs and Teams

To book your 4 night Christmas break quote: ‘Christmas Bridge Break’ Break’ We asked the winners of the

their experience at the event. Their candid report is below.

WE PLAY bridge most Wednesdays as a pair at Moseley Bridge

Club in Birmingham and have done so for over two years,

although David is also a member at Stourbridge. Shortly after we

teamed up we had some success in an EBU Pairs national event,

– and with very limited use of other conventions. Even though at

Moseley there is a high standard of play, we expect to be

marginally above the average, at times even surprising ourselves

but often being disappointed.

The 2013 EBU Masters Pairs competition was advertised at

Moseley, with one centre being at the West Midlands Bridge Club

in Solihull, relatively local to us. Having sought some reassurance

an embarrassment at the event, we decided to enter. John,

fortunately, had free entry due to his Landmark promotion but

David had to pay!

not unfamiliar to us. However, for the first set of boards we sat

North-South at the far end of the room. The heating system was

back of North (John). Fortunately he had a scarf and cap in the

car and these were quickly called into action. Eventually, but

only after we had moved, the heating system started to

Moseley, with perhaps two or three pairs less experienced but

there was certainly a very friendly atmosphere at the event and

our impression was that everyone enjoyed the occasion.

We scored reasonably well in the first session and then

improved in the second session. We were therefore very pleased to

contented. Over the next day on searching the EBU website we

Knock-out Seniors Teams of Four Championship nationally we had been placed first. There was some apprehension

at the notice that the result was subject to ratification, especially

Closing date for entries: 7 June 2013 as the rankings had been reported in the Daily Telegraph on

Open to teams consisting of four to six players Would we enter next year – are we allowed to enter? Having

all of whom are EBU members born in 1953 or earlier. won the cup, there is a feeling that the only way would be

New format to give all non-seeded teams downwards but I suspect that we will want to defend our title.

Certainly we would encourage others to participate; there is good

standard of bridge, played in a competitive but friendly

environment. One recommendation, from our knowledge of the