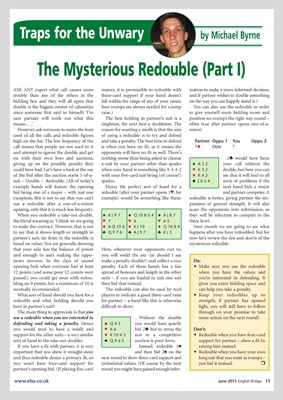 The Mysterious Redouble (Part I)

ASK ANY expert what call causes more majors, it is permissible to redouble with mation to make a more informed decision,

bidding box and they will all agree that fall within the range of any of your raises; on the way you can happily stand it.)

since someone first said to himself: ‘I’m raise.) to give yourself more bidding room and

means . . .’ singleton, the next best a doubleton. The often true after partner opens one-of-a-

However, ask someone to name the least reason for wanting a misfit is that the aim minor:

high on the list. The low frequency of the and take a penalty. The best time to defend Partner Oppo 1 You Oppo 2

call means that people are not used to it is when you have no fit, as it means the 1t Dble ?

and attempt to ignore the double and get opponents will have no fit as well. There’s

on with their own lives and auctions, nothing worse than being asked to choose 2® would have been

of the bid after the auction starts 1-of-a- with your five-card suit being (of course!) t K62 see that it will lead to all

bid being one of a major – with just one redouble (after your partner opens 1™, for and partner competes. A

exception; this is not to say that you can’t example) would be something like these: redouble is better, giving partner the im-

use a redouble after a one-of-a-minor pression of general strength. It will also

opening, only that it is much less frequent). scare the opponents into submission, as

to say that it shows length or strength in ® Q976 ® AJ97 ® KJ3 happens after you have redoubled, but for

partner’s suit, far from it; the redouble is now let’s review the dos and don’ts of the

based on values. You are generally showing mysterious redouble:

that your side has the balance of power Here, wherever your opponents run to,

nents nervous. In the days of sound make a penalty double?) and collect a nice Do:

opening bids when everyone had at least penalty. Each of these hands has a fair • Make sure you use the redouble

passed), you could get away with redou- suits – if you are loaded in just one suit you’re interested in defending. It

bling on 9 points, but a minimum of 10 is then bid that instead. gives you extra bidding space and

normally recommended. The redouble can also be used by Acol can help you take a penalty.

redouble and what holding should you for partner – a hand like this is otherwise strength; if partner has opened

have in partner’s suit? difficult to show: light, you will still have to follow

use a redouble when you are interested in Without the double some action on the next round!

defending and taking a penalty. Hence ´ Q43 you would have quietly

sort of hand to the take-out doubler. ® Q965 auction is poor form. support for partner – show a fit by

If you have a fit with partner, it is very Instead, redouble 1´ raising him instead.

and thus redouble denies a primary fit, so next round to show three-card support and long suit that you want as trumps –

you won’t have four-card support for invitational values. (Of course by the next just bid it instead. r

partner’s opening bid. (If playing five-card round you might have gained enough infor-