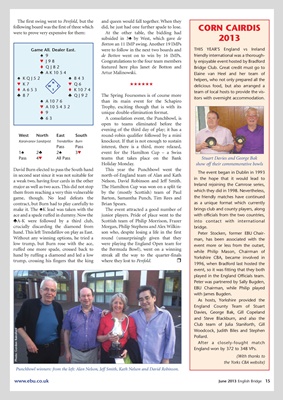 The first swing went to Penfold, but the and queen would fall together. When they

following board was the first of three which

were to prove very expensive for them:

did, he just had one further spade to lose.

At the other table, the bidding had

Game All. Dealer East. were to follow in the next two boards and THIS YEAR'S England vs Ireland

´ 9 de Botton went on to win by 16 IMPs. friendly international was a thorough-

® 63 A consolation event, the Punchbowl, is

open to teams eliminated before the

evening of the third day of play; it has a

Karaivanov Sandqvist Trendafilov Burn knockout. If that is not enough to sustain

Pass Pass interest, there is a third, more relaxed,

in the hope that it would lead to

a weak two, having four cards in the other Nelson, David Robinson and Jeff Smith.

major as well as two aces. This did not stop The Hamilton Cup was won on a split tie Ireland rejoining the Camrose series,

them from reaching a very thin vulnerable by the (mostly Scottish) team of Paul which they did in 1998. Nevertheless,

game, though. No lead defeats the Barton, Samantha Punch, Tim Rees and the friendly matches have continued

contract, but Burn had to play carefully to Brian Spears. as a unique format which currently

make it. The ´K lead was taken with the The event attracted a good number of brings club and county players, along

ace and a spade ruffed in dummy. Now the junior players. Pride of place went to the with officials from the two countries,

®A-K were followed by a third club, Scottish team of Philip Morrison, Frazer into contact with international

hand. This left Trendafilov on play as East. son who, despite losing a life in the first Peter Stocken, former EBU Chair-

Without any winning options, he tried a round (unsurprisingly given that they man, has been associated with the

low trump, but Burn rose with the ace, were playing the England Open team for event more or less from the outset,

ruffed one more spade, crossed back to the Bermuda Bowl), went on a winning while Philip Mason, Chairman of

trump, crossing his fingers that the king where they lost to Penfold. r

1996, when Bradford last hosted the

event, so it was fitting that they both

played in the England Officials team.

Peter was partnered by Sally Bugden,

As hosts, Yorkshire provided the

and Steve Blackburn, and also the

After a closely-fought match