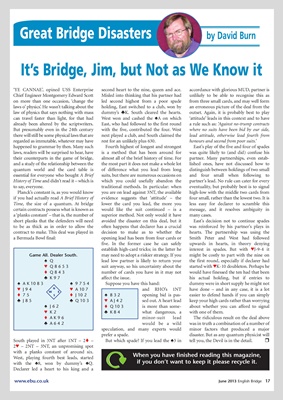 It’s Bridge, Jim, but Not as We Know it

on more than one occasion, ‘change the led second highest from a poor spade from three small cards, and may well form

laws o’ physics’. He wasn’t talking about the holding, East switched to a club, won by an erroneous picture of the deal from the

law of physics that says nothing with mass dummy’s ®K. South cleared the hearts. outset. Again, it is probably best to play

can travel faster than light, for that had West won and cashed the ´A on which ‘attitude’ leads in this context and to have

already been altered by the scriptwriters. East, who had followed to the first round a rule such as: ‘Against no-trump contracts

But presumably even in the 24th century with the five, contributed the four. West where no suits have been bid by our side,

there will still be some physical laws that are next played a club, and South claimed the lead attitude, otherwise lead fourth from

regarded as immutable, whatever may have rest for an unlikely plus 630. honours and second from poor suits.’

happened to grammar by then. Many such Fourth highest of longest and strongest East’s play of the five and four of spades

laws, readers will be surprised to hear, have is a method that has been around for was quite likely to (and did) confuse his

their counterparts in the game of bridge, almost all of the brief history of time. For partner. Many partnerships, even estab-

and a study of the relationship between the the most part it does not make a whole lot lished ones, have not discussed how to

essential for everyone who bought A Brief suits, but there are numerous occasions on and four small when following to

History of Time and didn’t read it – which is which you could usefully abandon the partner’s lead. No rule can cater for every

to say, everyone. traditional methods. In particular: when eventuality, but probably best is to signal

Planck’s constant is, as you would know you are on lead against 3NT, the available high-low with the middle two cards from

if you had actually read A Brief History of evidence suggests that ‘attitude’ – the four small, rather than the lowest two. It is

Time, the size of a quantum. At bridge lower the card you lead, the more you less easy for declarer to scramble this

certain contracts possess what is known as would like the suit continued – is a message, and it resolves ambiguity in

a ‘planks constant’ – that is, the number of superior method. Not only would it have many cases.

short planks that the defenders will need avoided the disaster on this deal, but it East’s decision not to continue spades

contract to make. This deal was played in decision to make as to whether the hearts. The partnership was using the

a Bermuda Bowl final: opening lead has been from four cards or Smith Peter and West had followed

five. In the former case he can safely upwards in hearts, in theory denying

establish high-card tricks; in the latter he interest in spades. But with ™J-9-4 it

Game All. Dealer South. may need to adopt a riskier strategy. If you might be costly to part with the nine on

´ Q lead low partner is likely to return your the first round, especially if declarer had

™ Q8653 suit anyway, so his uncertainty about the started with ™K-10 doubleton. Perhaps he

® K97 affect the issue. his actual holding, but if entries to

speculation, and many experts would minor factors that produced a major

prefer a spade. disaster. But as any quantum physicist will

with a planks constant of around six.

West, playing fourth best leads, started When you have finished reading this magazine,

Declarer led a heart to his king and a