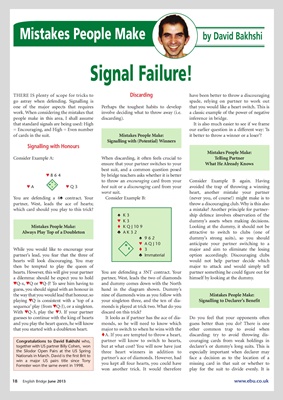 go astray when defending. Signalling is spade, relying on partner to work out

one of the major aspects that requires Perhaps the toughest habits to develop that you would like a heart switch. This is

work. When considering the mistakes that involve deciding what to throw away (i.e. a classic example of the power of negative

people make in this area, I shall assume discarding). inference in bridge.

that standard signals are being used: High It is also much easier to see if we frame

= Encouraging, and High = Even number our earlier question in a different way: ‘Is

of cards in the suit. Mistakes People Make: it better to throw a winner or a loser’?

Consider Example A: When discarding, it often feels crucial to Telling Partner

ensure that your partner switches to your What He Already Knows

™864 by bridge teachers asks whether it is better

N to throw an encouraging card from your Consider Example B again. Having

You are defending a 4´ contract. Your Consider Example B: (never you, of course!) might make is to

partner, West, leads the ace of hearts; throw a discouraging club. Why is this also

which card should you play to this trick? a mistake? Another principle for partner-

Mistakes People Make: t K Q J 10 9 Looking at the dummy, it should not be

N ™ A Q J 10 anticipate your partner switching to a

partner’s lead, you fear that the three of ® Immaterial option accordingly. Discouraging clubs

hearts will look discouraging. You may would not help partner decide which

hearts. However, this will give your partner You are defending a 3NT contract. Your partner something he could figure out for

a dilemma: should he expect you to hold partner, West, leads the two of diamonds himself by looking at the dummy.

™Q-x, ™Q or ™Q-J? To save him having to and dummy comes down with the North

guess, you should signal with an honour in hand in the diagram shown. Dummy’s

the way that you would lead that honour, so nine of diamonds wins as you follow with Mistakes People Make:

playing ™Q is consistent with a ‘top of a your singleton three, and the ten of dia- Signalling to Declarer’s Benefit

sequence’ play (from ™Q-J), or a singleton. monds is played at trick two. What do you

and you play the heart queen, he will know monds, so he will need to know which guess better than you do? There is one

that you started with a doubleton heart. major to switch to when he wins with the other common trap to avoid when

tA. If you are tempted to throw a heart, discarding: try to avoid throwing dis-

Congratulations to David Bakhshi who, partner will know to switch to hearts, couraging cards from weak holdings in

together with US partner Billy Cohen, won but at what cost? You will now have just declarer’s or dummy’s long suits. This is

Nationals in March. David is the first Brit to partner’s ace of diamonds. However, had face a decision as to the location of a

win a major US pairs title since Tony

Forrester won the same event in 1998.

you kept all four hearts, you could have missing card in that suit or whether to

won another trick. It would therefore play for the suit to divide evenly. It is