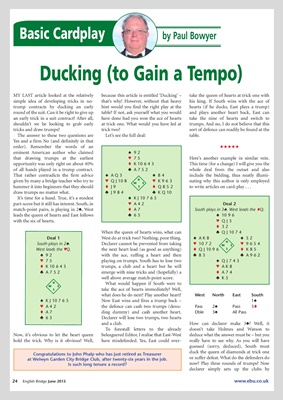 Ducking (to Gain a Tempo)

simple idea of developing tricks in no- that’s why! However, without that heavy his king. If South wins with the ace of

trump contracts by ducking an early hint would you find the right play at the hearts (if he ducks, East plays a trump)

round of the suit. Can it be right to give up table? If not, ask yourself what you would and plays another heart back, East can

an early trick in a suit contract? After all, have done had you won the ace of hearts take the nine of hearts and switch to

shouldn’t we be looking to grab early at trick one. What would you have led at trumps. And no, I do not believe that this

tricks and draw trumps? trick two? sort of defence can readily be found at the

The answer to these two questions are Let’s see the full deal: table.

Yes and a firm No (and definitely in that

order). Remember the words of an HHHHH

that drawing trumps at the earliest ™ 75 Here’s another example in similar vein.

of all hands played in a trump contract. ® A752 whole deal from the outset and also

That rather contradicts the firm advice ´ AQ3 ´ 84 include the bidding, thus neatly illumi-

™ K963 nating why this author is only employed

hammer it into beginners that they should t J9 S t Q852 to write articles on card-play . . .

part-score but it still has interest. South, in ™ A42 Deal 2

What would happen if South were to

what does he do next? Play another heart? West North East South

t A7 ding dummy) and cash another heart. Dble 3´ All Pass

Now, it’s obvious to let the heart queen beleaguered Editor, I realise that East-West deduce what the answer must be – but you

hold the trick. Why is it obvious? Well, have misdefended. Yes, East could over- really have to see why. As you will have

Congratulations to John Phalp who has just retired as Treasurer

duck the queen of diamonds at trick one

at Welwyn Garden City Bridge Club, after twenty-six years in the job. or suffer defeat. What do the defenders do

Is such long tenure a record? now? Play three rounds of trumps? Now

declarer simply sets up the clubs by