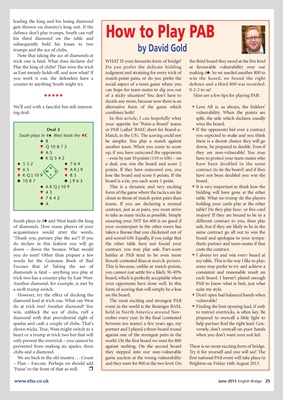 leading the king and his losing diamond

gets thrown on dummy’s long suit. If the

his third diamond on the table and

subsequently hold his losses to two

How to Play PAB

trumps and the ace of clubs. by David Gold

Note that taking the ace of diamonds at

trick one is fatal. What does declarer do? WHAT IS your favourite form of bridge? the third board they saved at the five level

Play the king of clubs? That wins the trick Do you prefer the delicate bidding at favourable vulnerability over our

as East meanly holds off, and now what? If judgment and straining for every trick of making 4´. So we needed another 800 to

you work it out, the defenders have a match-point pairs, or do you prefer the win the board, we found the right

counter to anything South might try. social aspect of a team game where you defence and a third 800 was recorded:

HHHHH of a sticky situation? You don’t have to Here are a few tips for playing PAB:

decide any more, because now there is an

We’ll end with a fanciful but still interest- alternative form of the game which • Love All is, as always, the bidders’

ing deal: combines both! vulnerability. When the points are

In this article, I can hopefully whet split, the side which declares usually

your appetite for ‘Point-a-Board’ teams wins the board.

Deal 3 or PAB (called ‘BAM’, short for Board-a- • If the opponents bid over a contract

South plays in 4´. West leads the tK. Match, in the US). The scoring could not you expected to make and you think

´ 8 be simpler. You play a match against there is a decent chance they will go

t A5 up, if you have outscored the opponents they are non-vulnerable! You may

™ AKJ9 points. If they have outscored you, you contract (to tie the board) and if they

t 7642 closer to those of match-point pairs than table. What no-trump do the players

® A teams. If you are declaring a normal holding your cards play at the other

contract, just as at pairs, you must strive table? Do they play four- or five-card

to take as many tricks as possible. Simply majors? If they are bound to be in a

South plays in 4´ and West leads the king ensuring your 3NT for 600 is no good if different contract to you, then play

of diamonds. How many players of your your counterpart in the other room has safe, but if they are likely to be in the

acquaintance would utter the words, taken a finesse that you chickened out of same contract go all out to win the

‘Thank you, partner, play the ace’? If you and scored 630. Equally, if you judge that board and apologise to your sympa-

down – down the Swanee. What would contract, you may play safe. Part-score costs the contract.

you do next? Other than prepare a few battles at PAB tend to be even more • I always try and win every board at

words for the Guinness Book of Bad fiercely contested than at match-points. my table. This is the way I like to play;

Excuses that is? Taking the ace of This is because, unlike at match-points, some may prefer to try and achieve a

trick two has a counter-play by East-West. board, which is perfectly acceptable when each board. I haven’t played enough

Another diamond, for example, is met by your opponents have done well. In this PAB to know what is best, just what

a swift trump switch. form of scoring that will simply be a loss suits my style.

However, try the effect of ducking the on the board. • Don’t open bad balanced hands when

diamond lead at trick one. What can West The most exciting and strongest PAB vulnerable!

do at trick two? Another diamond? You event in the world is the Reisinger BAM, • Finding the best opening lead, if only

win, unblock the ace of clubs, ruff a held in North America around Nov - to restrict overtricks, is often key. Be

diamond with that providential eight of ember every year. In the final (contested prepared to overcall a little light to

spades and cash a couple of clubs. That’s between ten teams) a few years ago, my help partner find the right lead. Con-

eleven tricks. True, West might switch to a partner and I played a three-board round versely, don’t overcall on poor hands

heart or a trump at trick two but that will against one of the strongest pairs in the when you don’t want your suit led.

only prevent the overtrick – you cannot be world. On the first board we went for 800

prevented from making six spades, three against nothing. On the second board There is no more exciting form of bridge.

clubs and a diamond. they stepped into our non-vulnerable Try it for yourself and you will see! The

We are back to the old mantra . . . Count game auction at the wrong vulnerability first national PAB event will take place in

‘Pause’ to the front of that as well. r