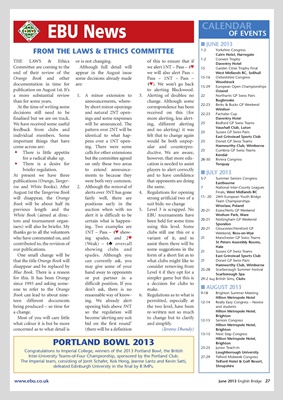 THE LAWS & Ethics or is not changing. of this to ensure that if Daventry Hotel

end of their review of the appear in the August issue we will also alert Pass – West Midlands BC, Solihull

documentation in time for are: 4™). We won’t go back 15-29 European Open Championships

a more substantial review 1. A minor extension to 3. Alerting of doubles: no 22 Northants GP Swiss Pairs

than for some years. announcements, where- change. Although some Bugbrooke

finalised but we are on track. ings and some responses more alerting, less alert- Daventry Hotel

We have received some useful will be announced. The ing, different alerting 23 Bedford GP Swiss Teams

individual members. Some identical to what hap- felt that to change again East Grinstead Sports Club

come across are: ing. There were some ular and counterpro- Hamworthy Club, Wimborne

• There is little appetite calls for other extensions ductive. We are aware, Kendal

for a radical shake up. but the committee agreed however, that more edu- 28-30 Riviera Congress

publications (Orange, Tanger- were both very common. that opponents are doing Eastbourne

ine and White Books). After 2. Although the removal of the same. 7 National Inter-County Leagues

will disappear, the Orange fairly well, there are strong artificial two of a 11- 20 24th European Youth Bridge

Book will be about half its positions early in the suit bids: no change Wroclaw, Poland

previous length and the auction when with no 5. Level 3 is scrapped. No 20-21 Essex/Herts GP Weekend

White Book (aimed at direc- alert it is difficult to be EBU tournaments have Wodson Park, Ware

isers) will also be briefer. My ing. Two examples are using this level. Some 20-21 Gloucester/Hereford GP

thanks go to all the volunteers 1NT – Pass – 4™ show- clubs still use this or a Weekend, Ross-on-Wye

who have commented on, and ing spades, and 2™ variant of it, and to 21 Manchester GP Swiss Teams

contributed to, the revision of (Weak) – 4® overcall assist them there will be St Peters Assembly Rooms,

our publications. showing clubs and some suggestions in the 21 Sussex GP Swiss Teams

One small change will be spades. Although you form of a short list as to East Grinstead Sports Club

that the title Orange Book will can currently ask, you what clubs might like to 21 Dorset GP Swiss Pairs

disappear and be replaced by may give some of your consider removing from Hamworthy Club, Wimborne

Blue Book. There is a reason hand away to opponents Level 4 if they opt for a Scarborough Spa

for this. It has been Orange or put partner in a simpler game but this is 29-2 Aug British Sims, Clubs

since 1993 and asking some- difficult position. If you a decision for clubs to

Book can lead to about nine- reasonable way of know- 6. Regulations as to what is

being produced – so time for opening bids above 3NT the two level, have been and students

a change. so the regulation will re-written not so much Hilton Metropole Hotel,

what colour it is but be more bid on the first round’ and simplify. Hilton Metropole Hotel,

Congratulations to Imperial College, winners of the 2013 Portland Bowl, the British Loughborough University

defeated Edinburgh University in the final by 8 IMPs. Shropshire